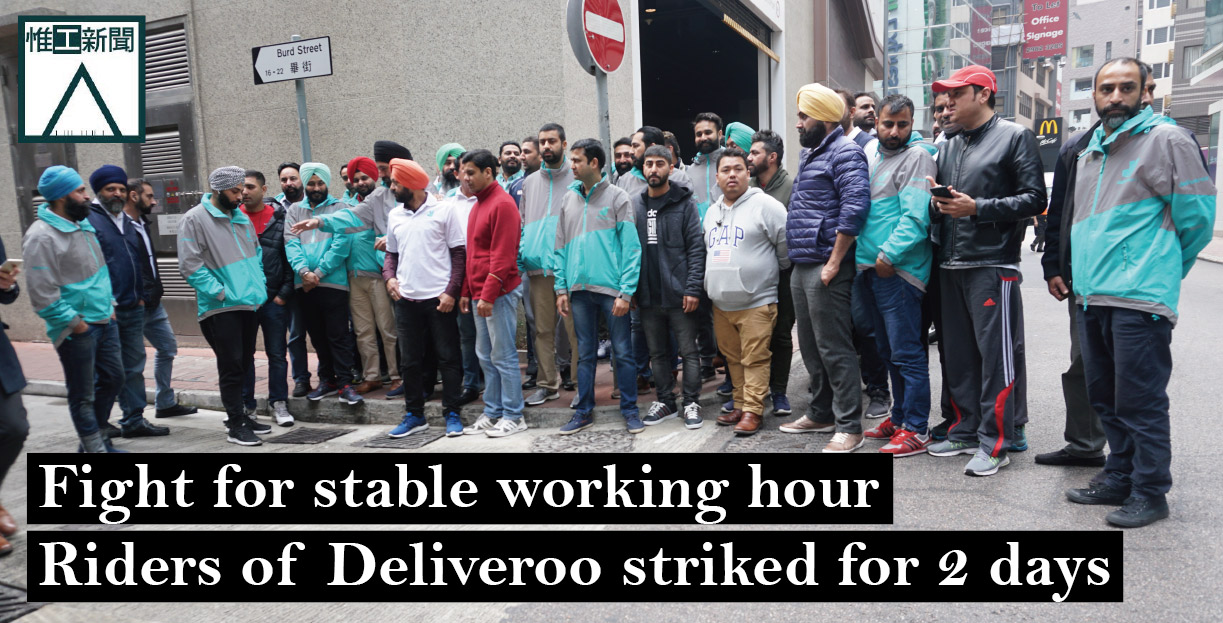 【Worker News】It has become a common practice for employer to evade labour protection by turning workers to self-employed. On 23rd January, a group of riders working for the takeaway food delivery company Deliveroo who are affected by “precarisation" continue their strike for the second day. However, contrary to stories from mass media, who described them as self-employed, the condition of these workers are not so clear-cut, as similar examples can be seen in other industries.

Striking workers said that, while the contract they signed stated that they are self-employed, the company have been making various demands on their working hours. Since they are paid with a hourly rate of HK$75, working hours directly affect the wages of each workers. When signing the contract, the company had guaranteed (minimum) 11-hour workday.

However, The firm is now forcing to impose a new policy to reduce and make working hours flexible, which will significantly reduced the income of the workers and forbid workers to have leaves during weekend. One of the key feature to distinguish “real” or “fake” self-employment is whether or not the workers have full control over their working hours.

Another reason leading to strike action concern fines. Narrow streets, few parking area and tall buildings increase the chances for riders to be fined because they have to park on the street and need longer time to deliver food at the door. Previously these penalties were covered by the firm. Under new policy, the firm will stop paying fines for the riders, creating additional burden for the riders. One interviewed worker said that at worst he could received two penalty notice a day.

One of the striking worker has two demands for the firm:

1. Either allow riders to feely control their working hours or recognise the statue of rider as formal worker. If the firm forcefully imposed the new working arrangement, he wants to receive the same benefit with a formal worker, pension (MPF), labour insurance and be taxed like a worker.
2. Pay fines for riders.

On the first day of the strike, the firm hasn’t start any formal negotiation but send one rider-turned office worker to talk to the workers.Today, hundreds of riders who are from different ethnic backgrounds are still on strike. One striker said that “This issue have united Pakistani, Indian and local Chinese."

Deliveroo was established in The UK in 2013, which was branded “a new employment model”. The firm is now operating in 12 countries, including European countries, Singapore, Australia and UAE. In 2016, the firm had an annual income of 129m pounds, 13000 employees and 20000 “self-employed” riders.

Recently, riders in the Nederland and Belgium went on strike to protest a new proposed change in contract status to self-employed in 1st February.

latest update: Yesterday evening, Deliveroo-HK guaranteed the riders that there will not be any reduction in working hours, who will keep their 11-hour work day. Although this is not the perfect ending, but the workers decided to accept it and end the strike. According to the union from HKCTU, this kind of “fake self-employment” system has become very popular. They will continue their organising and struggle.