Writing in the bathroom Interview with Migrant Zine writers 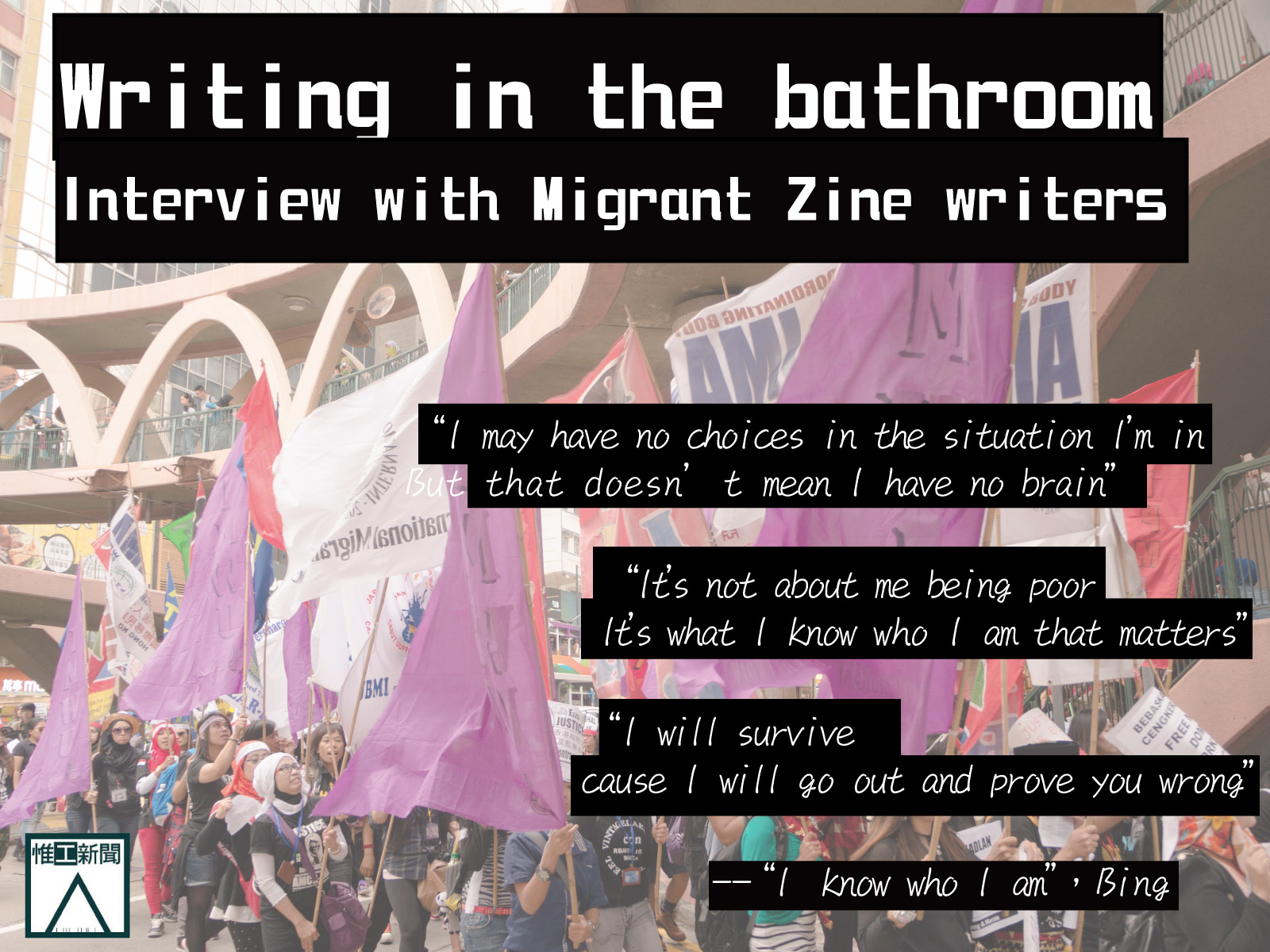 The cover of the publication is mainly in green and pink, just like the Indonesian Pandan cake. The title “Work is Work” emphasizes the fact that domestic work is a proper job, explained one of the creators, Bing. The picture on the cover shows a worker stretching and relaxing on a mountain to make the point that domestic workers do have their lives besides labouring in the house. This magazine aims at using words to reveal the thoughts and feelings of migrant domestic workers, as their human sides are often conveniently neglected.

“I may have no choices in the situation I’m in/ But that doesn’t mean I have no brain” These are powerful words written by Bing, who came from the Philippines.

From Workshops to Publication

Together with a group of local Hong Kongers concerned with welfare of migrant domestic workers, Mission for Migrant Workers (MFMW) has organized more than a dozen workshops since last October in which participants were encouraged to express their inner thoughts about themselves, as well as the stereotype of domestic workers in society.

In the workshop, workers have lunch together. Their food, including fried items, small cakes and chilli, was printed on the back cover of the magazine. Talking of chili, Dove, who came from the Philippines, shook her heads and laughed. Before meeting her employer in Singapore, she was not used to spicy food. However she had no choice but to eat with her employer. “My nose kept running when I ate. It took me as long as three months to get used to it.”

"To compile all the work into a publication was an afterthought. Cynthia, from MFMW, explained that their primary aim of the publication was to explain to local Hong Kongers that living out should be an option. It was not easy to communicate this idea with the locals, and Cynthia believes that letting domestic workers tell their stories is one way to do it. Once the local people have heard of their predicaments and see how common it is, Cynthia believes, they would understand why migrant domestic workers go on demonstrations and what they are fighting for. "

Writing in the bathroom

Dove was the first one to complete her work. One of her tasks at her employer’s home was to take care of a baby. As she had to sleep in the same room as the baby, she was not allowed to switch on the light at night. When inspiration came, she had to grab her pen and paper and write them down in the bathroom. Dove had very little time before the baby cried for attention again. The picture on the cover of the book was from her friend who likes hiking. Dove saw the picture on social media and wrote the poem Nature Lover, in which she expresses the aspiration for freedom.

Vyan from Indonesia is an experienced writer. She once wrote a book but never got back her manuscript after lending it to a friend. As Vyan joined the workshop later, her work was not published in the first book.

Vyan is an active organizer of events for domestic workers, but she often missed out on events she helped organize because she was denied her Sunday break. Until one day, her employer physically assaulted her in public and she finally decided to resign. Her employer said okay after receiving her resignation letter, but soon begged her to stay. She knew that no worker could stay in that house for more than three months, and she had stayed for more than 19 months, and she was exhausted. Now she finally has her day off on Sundays and she could happily join in all the events.

The majority of stories in the book are written in English except for a few in Filipino. When V first attended the workshop she was accompanied by a few friends, but they dropped out because no one speaks Indonesian. Most of the conversations there was in English or Chinese. V then came to the workshops alone. She first thought writing in English would be hard, but she still chose it because it would allow more people to read it.

As a deadline fighter, Bing seldom finds inspiration to write before the last minute. She likes to write stories of people around her. She is interested in stories which are different, and found Coy, who is a lesbian who rarely tell others about herself. She interviewed Coy, and wrote her story in first person narrative. Bing got into Coy’s identity as a lesbian and her struggle with her gamble-addict mother.

When the issue of lesbian was raised, Vyan revealed that she is also interested in women. After reading Coy’s story, she wrote a poem. She told us that her past employers were all aware of her sexual orientation, and they were mostly fine with it as long as she could work. However, once she went to an interview and the employers’ daughter really liked her. After knowing she was a lesbian, the employer was sceptical about hiring her because she was worried her daughter would become a lesbian under her influence. Vyan said she understood and did not take the job. Society’s misconception on LGBT could have actual impact on migrant workers’ job.

Two years ago, Erwiana who was still scarred from her employers’ torture, spoke to the crowd in the One Billion Rising Revolution event organized by MFMW. Bing felt her fragility deeply and after the same event this year, she was inspired to write the following piece:

I own all of me
My body, my feelings, my soul
I may have no choices in the situation I’m in
But that doesn’t mean I have no brain

Each one of us have something beautiful and
wonderfully unique individual inside
Don’t tell me I’m a “trash”
I don’t mind your words
It’s not about me being poor
It’s what I know who I am that matters.

But with all these…
I will show you
that I dream, I hope, I will survive
cause I will go out and prove you wrong

other news about migrant domestic workers: