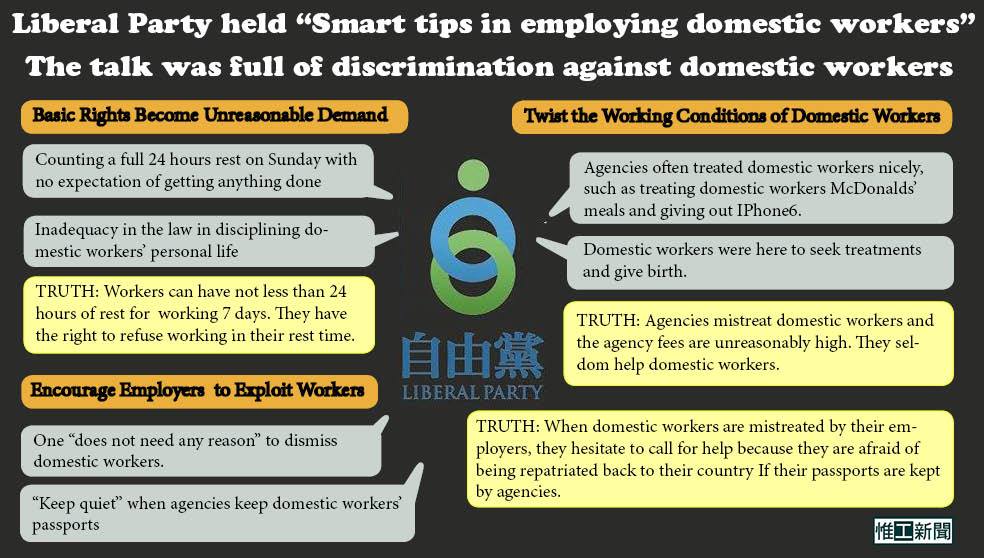 On the 19th August, Filipino domestic worker Rimando was suspected of stealing cash and the police was called to investigate the case. They found no evidence for the accusation, yet Rimando was fired by her employer. Rimando was overcome with emotion and committed suicide by jumping off the building.

In the incident, the employer’s friend insisted Rimando has stolen the money even though she only saw her holding her employer’s handbag. Rimando’s employer also fired her without further reason nor evidence. Discussion of domestic workers conduct at home, including suspicion of them stealing and mistreating elderly and children, are common on internet forums amongst employers. Yet perhaps more importantly, some political parties should be held responsible for such wide-spread yet unfounded distrust against domestic workers.

The Liberal Party has seldom swayed from its party line to get support from employers at the expense of workers’ rights. Last Sunday (16th of August), district council member Lee Chen-kueng from the Liberal Party organized a talk with a concern group of domestic worker employers on “Smart tips in employing domestic workers”. Short of being smart, the talk was so discriminative and full of false accusations that individual employers among the audience found it unacceptable. “No employers in Hong Kong would make such of requirements of their employees,”as one employer from the audience told our reporter at the talk.

The talk, which took place in the community centre in Wan Chai, attracted a sizable audience including couples and families. At the start of the talk, Mr. Lee Chun-keung immediately set the pretext that domestic workers are in a “favourable position” within the law of Hong Kong, and that employers in Hong Kong, being totally unprotected by the law, should fend themselves through effective management of their domestic workers. However, throughout the talk, what he referred to as the excessive legal  protection of domestic workers was only the same as those that protect the benefit of ordinary workers written in the “Employment Guideline”. These include the entitlement to one month’s salary in case of immediate termination of employment contract, the protection of pregnant employees from being fired, and the assistance from unions.

Ms. Chui Hiu-tong from the employer concern group described the “situation of the employers fallen victim” to domestic workers’ malpractice, such as “counting a full 24 hours rest on Sunday with no expectation of getting anything done”, “refusal to change New Year holiday to another day because they made plans with friends”. These reasonable expectation of benefits entitled to ordinary employees in Hong Kong are suddenly seen as excessive when applied to domestic workers.

Amnesty International pointed out in their research report published in 2013, that Indonesian domestic workers work 17 hours a day on average, and had to be ready to work 24 hours a day. However, this was never mentioned by the speaker.

“Domestic workers are here for medical treatment and giving birth, not to work”

Someone unfamiliar with the costs of domestic workers to work in Hong Kong may easily believe that they are in a favourable position. The speaker has either avoided talking about this, or twisted the fact to create the impression that working in Hong Kong was the best bargain, that domestic workers are more like enjoying a vacation than working.

Chui told the audience that domestic workers only needed  to pay two to three months worth of salary as agent fee. However this is not true. Domestic workers organizations have previously presented evidence that the agent fees often cost three to six months of salary, which is about HKD 12k to 24k. Former staff at an employment agency also told us, that they would force the domestic workers to take out a loan from loan companies to pay off the agent fees at once first, before paying off their debt monthly.

During the talk, the speakers avoided mentioning evident exploitation. Instead they painted the rosy picture of how agencies often treated domestic workers more nicely than employers, such as treating domestic workers McDonalds’ meals and giving out IPhone6.

However, one only needs to look into the news to find out mistreatment of domestic workers by agencies are not at all rare. In 2013,  despite being seriously injured by her employer Luo Wen-tung, Erwiana was sent back by the agency staff after she called for help. Elis, who was killed by the slab of concrete falling from the building, was arranged to sleep outdoor by her agency because there was not enough space. The accident happened because she had to sleep at a dangerous location.

One of the common reasons that domestic workers did not escape abusive situation is that their passports were kept at the agency. They do not seek help from the police because they are afraid to be caught as illegal immigrants. Lee pointed out that it was illegal for employers to confiscate passports themselves, but should “keep quiet” when agencies offer to do it. The speakers also suggested other ways that employers could

At the final Q and A session, a question was raised from the audience on the grounds to dismiss domestic workers. Chui directly pointed out that one “does not need any reason” to do so, and told the employer to “not be afraid” to “do the right thing”.

Another employer asked if the domestic workers could be brought elsewhere to work. Representative from the employers concern group Lee Bing-kong pointed out that the employed workers could only work at a designated  place, yet employers should not be afraid of “treading the line” because evidence was often hard to find for these cases.

At the end of the talk, a member from the audience got into a discussion with his family. He did not agree with the speakers and pointed out that their speech had been discriminatory. He found it unacceptable to make the sort of requirements to domestic workers that were suggested in the talk. However, this family was more worried about the fear spread by the speakers, and was very much concerned about staying under the same roof with their “problematic domestic worker”.