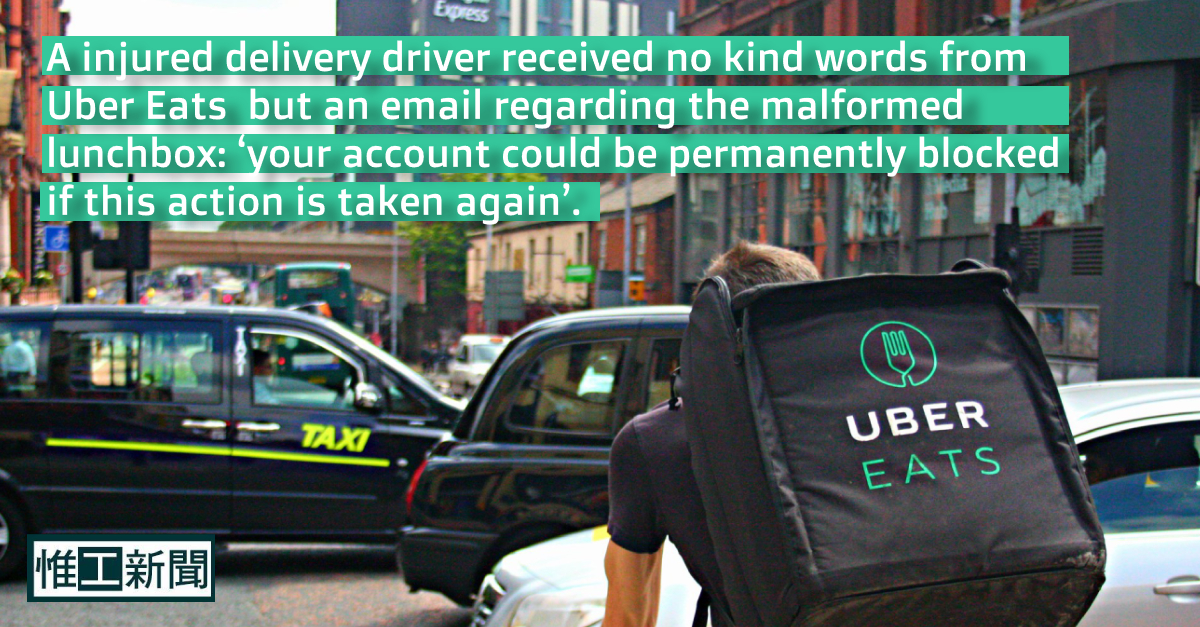 On 3 October, 17 workers from Uber Eats Japan announced the establishment of a trade union in order to fight for better treatment at work. Uber and its ride-sharing platform rival Lyft had long been criticised for not providing their workers with accident insurance and other treatments enjoyed by formal employees. These delivery drivers were called ‘platformers’. During the press conference, trade union chairperson Tomio Maeba claimed, ‘Uber refuses to bargain with workers. We hope to provide the opportunity to improve the working conditions of Uber Eats delivery drivers through collective bargaining, and ensure that work is safe and secure for workers at the platform.’ The trade union also planned to demand the company to ensure fair treatment for workers, and review the current practice of distance-based wage calculations.

Called Private Entrepreneurs: Delivery drivers to pay for injuries themselves

As Uber Eats entered Tokyo in 2016, it expanded across Japan and currently employs around 15 thousand workers there. Delivery drivers received orders from the company through mobile apps, then pick up food and beverage from restaurants on bike or motorcycles. Unlike other forms of part-time work with fixed working hours, many white-collar workers complemented their incomes with delivery work as they enjoyed a relatively high degree of autonomy over working hours. The spikes in orders during weekends, snowy and rainy days gave further incentives to work. An experienced driver could earn up to 20,000 yen (around HKD$1,450).

However, delivery drivers would be taken as ‘private entrepreneurs’ by the platform and would not be directly employed by it. Thus, they were not covered by industrial injury insurance and had to pay from their own pockets in case of accidents.

A former food and beverage delivery driver fractured his right arm from a collision accident last year, and realised that there was no such thing as applying for compensation when he attempted to do so. He expressed on TV, ‘I never assumed I would experience a car accident; I feel the risk only after I stopped having any income’. Besides not being compensated at all, he could not work in the trade again and received no income for two months.

Another delivery driver was injured as his motorcycle slipped and fell on a slippery road. He received no kind words from Uber Eats  but an email regarding the malformed lunchbox: ‘your account could be permanently blocked if this action is taken again’.

Uber Eats denied employment responsibilities to all delivery drivers especially regarding industrial injury compensations. This had led to huge amount of complaints. The company’s problem exploded simultaneously around the world. In Mexico, 5 Uber Eats delivery drivers lost their lives and tens of them were injured in car accidents in the first half of this year.

Two days before the trade union’s press conference, presumably Uber knew of the workers’ action, and launched a private industrial injury compensation package called ‘Partner Support Program’ for Japanese delivery drivers in collaboration with Mitsui Sumitomo Insurance. Uber claimed that it would pay for the insurance. A maximum of 10 million yen (around HKD 720,000) could be claimed in case of work-related death. However, the maximum medical treatment fee covered by this private insurance was only 250K yen (around HKD 18,000) - below the coverage of a typical comprehensive insurance. Also, there would be no compensation from Uber Eats if the delivery driver’s injury or death was deemed the result of his/her own gross negligence. To put it correctly, Uber Eats had only offered ‘cash gift of condolences’, instead of labour insurance with medical fees pre-paid in full.

The lack of transparency regarding how the delivery platform was run also infuriated a lot of Uber Eats workers. Yoshihito Kawakami, the lawyer who assisted delivery drivers in forming the trade union said, ‘Delivery drivers’ accounts can be arbitrarily banned by the platform, and that was often executed unilaterally’. Moreover, the accuracy of distances travelled calculated by the App was questionable. In the past, a male worker of around 30 years old could earn 15,000 yen per month (around HKD 1,086) if he worked on delivery on weekends in Tokyo. However, in this year that income was partially cut by an unknown algorithm. For example, the system would pay for 1.8km when the worker had actually completed a delivery of 2.1km. Someone reported a similar case on Twitter and contacted Uber, only to receive an email reply from the system. Perplexingly, the partially withheld income was later distributed back to the workers’ accounts. ‘What’s at stake was not that part of income, but delivery drivers’ loss of trust in the company in this incident’, said Yoshihito Kawakami.

Although delivery drivers owned their motorcycles, the way the platform was organised and how information was distributed dictated their livelihoods, putting them in the same situation as any typical worker. ‘Delivery work for Uber Eats had become an important source of workers’ income. If you protest by cancelling your account, you would not be able to earn a living. A lot of people shared this anxiety across the country,’ said Yoshihito Kawakami. ‘When Uber profits from delivery drivers’ labour, they have the responsibility to manage risks involved and any loss that delivery workers incur from work’.

Recently, there had been more and more news on the establishment of employment relations between delivery workers and their platforms. The newest case came from Taiwan. On 14 October, the Ministry of Labour conducted labour standards inspection regarding serious incidents of car accident-induced deaths concerning Foodpanda and Uber Eats, and decided that the firm and delivery workers were engaged in ‘employment relations’. Occupational Safety and Health Administration pointed out that according to regulations established in the terms of contract between the firm and the deceased, the platform substantially direct and monitor the delivery workers - those regulations included specified working periods, having to report to the company in case of absence, having to put on uniforms during service hours, the use of incubators with standard brand patterns and having to stick standard brand patterns on the motorcycles. The Administration decided that there existed an organisational subsidiarity and therefore employment relations between the two parties.

This news will help to bring about trade unions and workers’ movements regarding delivery drivers in other areas. According to the newest government statistics, there was an estimated population of over 3 million freelancers in Japan, including those working on contracts. The government considered submitting a bill to the parliament next year to protect the treatment of freelancers at work.