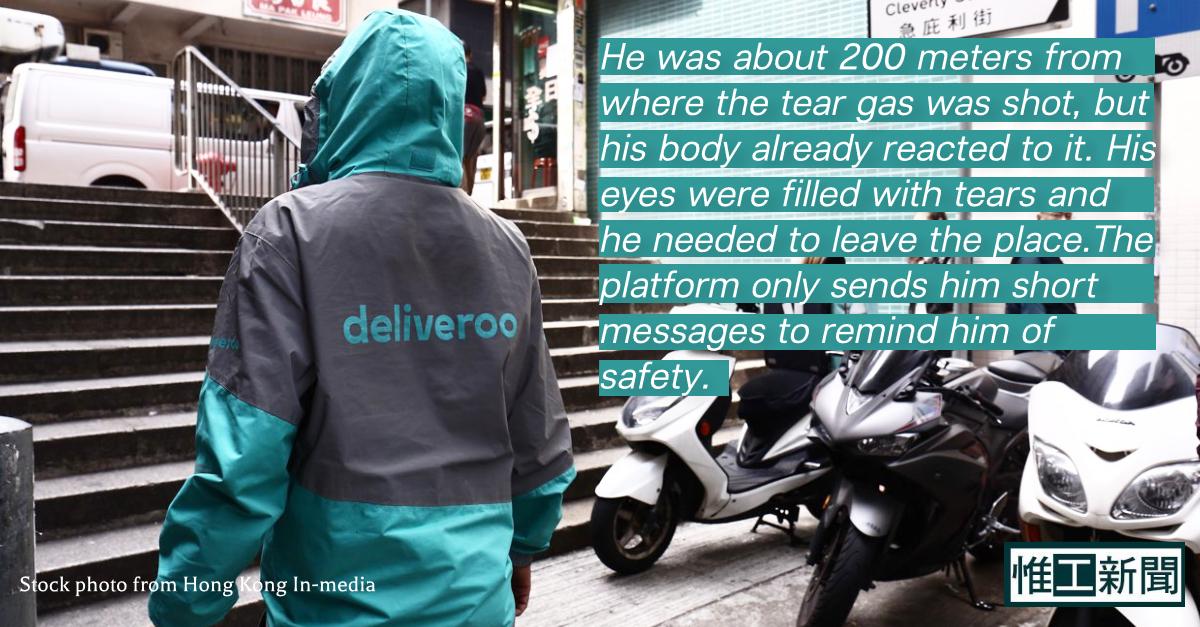 In recent years the take-away delivery market has gradually established itself in Hong Kong, with Foodpanda, Deliveroo and UberEats emerged as the three major players. The riders’ wages are hard earned: they biked through roads and narrow lanes to deliver the meals, and they are required by their platforms to work even under Red Rainstorm Signals and other severe weather conditions. Under the months long anti-extradition bill protest, this means the riders need to continue their work in teargas-filled streets. Many do not know what to do after inhaling the toxic gas, and the support from their platforms is near to none. What do the riders think about this? How much do they know about the latest resistant movement in the city? Do they follow what is happening? Worker News publishes this submitted article. The title is set by the editorial.

In the past two to three years, take-away delivery platforms have quietly engaged in a market domination battle, which ended with Foodpanda, Deliveroo and UberEats dominating the field. Consumers are not only paying on average HKD15-20 more for each delivery; they are bearing some less visible costs. Based on my calculation, the same meal is sold at a higher price on these platforms than in the restaurant itself; in other cases, the price may be the same but the portion would be reduced. For example, it can be as much as going from four chicken wings to two. Nevertheless, the platforms understand the psychology of consumers well. They splash on advertising. They offer free delivery during peak hours, and discounts. These tactics work well to attract new customers.

Hong Kong customers have learnt that no matter the weather – be it scotching hot or stormy, there will be delivery riders all around the city. In fact, these delivery platforms do not only hire riders on shiny motorcycles, they also hire “walkers”. Amongst those in the delivery business, we can find many are from minority backgrounds: Pakistani, Nepali, Indians and others. The majority of them have already obtained permanent citizenship in Hong Kong. They understand Cantonese, and many see Hong Kong as their home.

In the past three months, protesters have sprung up in major districts on Hong Kong Island and Kowloon, and these districts are also where delivery are on high demand. What do these platforms do when their delivery services are met with protests or clashes between protesters and the police?

As I approached M,  a delivery rider, he was downing a can of ‘Monster’. He told me, recently he was not able to catch orders during daytime, but only those from 6pm to 4am. He complained to me that customers ordering in the small hours often fall asleep waiting and would not pick up their phones. M will then have do the extra work of filing a report to the platform. He also mentioned, that his daughter is only a few years old, and his family of four are living on the wages from this delivery job, and that he is very stressed.

Meanwhile, I have been told by part time delivery riders from Deliveroo and Foodpanda, that during weekends when there were protests, Deliveroo would stop receiving orders from that district. On the other hand, Foodpanda would only stop the orders from specific roads or streets, while maintaining normal services to other places within the same district. Whichever way it is, the riders could only accept the arrangement, and there will not be compensation of any kinds from the platform.

Rider S told me, he has one been hit by tear gas while he was delivering an order. He was about 200 meters from where the tear gas was shot, but his body already reacted to it. His eyes were filled with tears and he needed to leave the place. I asked S if he knew how to manage after being in contact with tear gas. S said he did not know. The platform only sends him short messages to remind him of safety, but none of the practical information to manage emergency situations like this.

How do the riders see the situation that Hong Kong is in currently? I asked some riders who are waiting to take orders. Many asked me back, “what IS the situation actually?” “Has Carrie Lam withdrawn the bill?” “Why do the protesters continue to protest after it is withdrawn?” I answered each of their questions. They started to understand that protests are no longer only about the extradition bill, but is now against police violence during arrest and detention, and the characterization of the protest as ‘riot’. They listened carefully, until the notification beeped for the next order.

Rider B is a local Hong Konger. He told me his relatives have participated in the protest, and he has once got off work early to send protesters home. As for his family, his parents are “light blue” (pro-government) , and he himself is “yellow” (pro-democratic movement). Because of this, whenever he goes home for dinner, there is a covert understanding from everyone to avoid political topics.

R has lived in Hong Kong for 7 years and has been a biker for two to three years. He described that his job that earns “good money”, but he was recently reconsidering if he wanted to stay in Hong Kong in the future. He worried that the Chinese Government would use more and more tough measures to intervene into Hong Kong. He also asked me, “how will Hong Kong be like after 2047?”

Early August, I have been giving out leaflet about the protests to riders in different districts. Most South Asian and local riders were aware of the general strike, and they also said they supported it. On the day of the general strike of 5th August, I visited the districts where riders usually gather. I saw the number of riders had indeed halved. This could be due to the fact that many restaurants were closed that day. I asked for the opinions of some riders. They expressed that the protests had obviously affected their work and income, but since they were living in Hong Kong, they would want the best for Hong Kong. When I asked them how can Hong Kong be better, however, they did not know where to start. Even though they agree that Hong Kong deserves democracy, they would not join in the protest for the fear of being arrested. Only a few riders had good understanding and support the whole anti-extradition movement. The others, especially those from ethnic minority backgrounds, are not able to invest the time and energy to find out about the situation given their hard physical work and the language barrier to obtaining news. However, if someone is willing to explain to them, they are willing to try to understand.

“Good money” vs “Life risking”: the pros and cons of the gig economy

It is true that when these delivery platforms first started, the delivery staff earned a good wage. If they do this full time, they will earn HKD20-30k a month. After the profit period, however, if you look closely into the actual pros and cons, you will find that behind the good money is a job that is risking the workers lives: first and foremost is the long working hours, with some working overnight and during extreme weather conditions. Not only that, because the delivery staff are self-employed, they are in fact burdened with some costs. Just as a senior rider expressed on Hong Kong Forum: “your calculation is correct. The vehicle belongs to us, the license, insurance, maintenance of the tire, are all out of our own pockets. I do not get paid if I stop working for a day. We do not have labour insurance, paid holiday. There are also many newcomers to share the market. If you lose money, no one will compensate you. The only good thing is, if you earn more, you do not pay tax for it.”

And if we look closely at the system in place in these platforms, you can see they are carefully designed for a high level of control over the delivery staff: they need to report in advance when they will be available (this is the opposite of “work whenever you can”); they need to guarantee a high rate of order taking, punctuality, as well as a five star recommendations from the customers. Even though the delivery staff are under such strict labour control, these platforms can take advantage of the legal gaps that allow them to comfortably deny a standard “employer-employee” relationship. Many delivery staff do not sign a standard contract with their platforms, which means they are not more than a freelance worker and are not entitled to any labour protection. Most of the delivery staff I have talked to believed that self-employment can give them more control over their time. However, when I asked about their life, they honestly admitted that they have no time for themselves after work and sleep.

Certainly, the resistance movement happening in Hong Kong right now is addressing some urgent issues. At the same time, we should not forget that behind the “frontline” protesters, social activists are struggling to connect the vast number of grassroot workers. For grassroot workers in Hong Kong (no matter where they are from), especially with the many of them who are self-employed, their time is occupied by work. They also do not have timely and effective channels to look for information to understand fully what is going on and the status of other workers. Many of the workers live from hand to mouth, but their livelihood should not be sacrificed because of the movement. We need someone to play the role of a connector, to pay attention to their working condition, and to create better channels for them to stay close to the latest development in different social issues.

In order to protect riders from retaliation or monitoring from their platforms, their names and locations have been obscured.