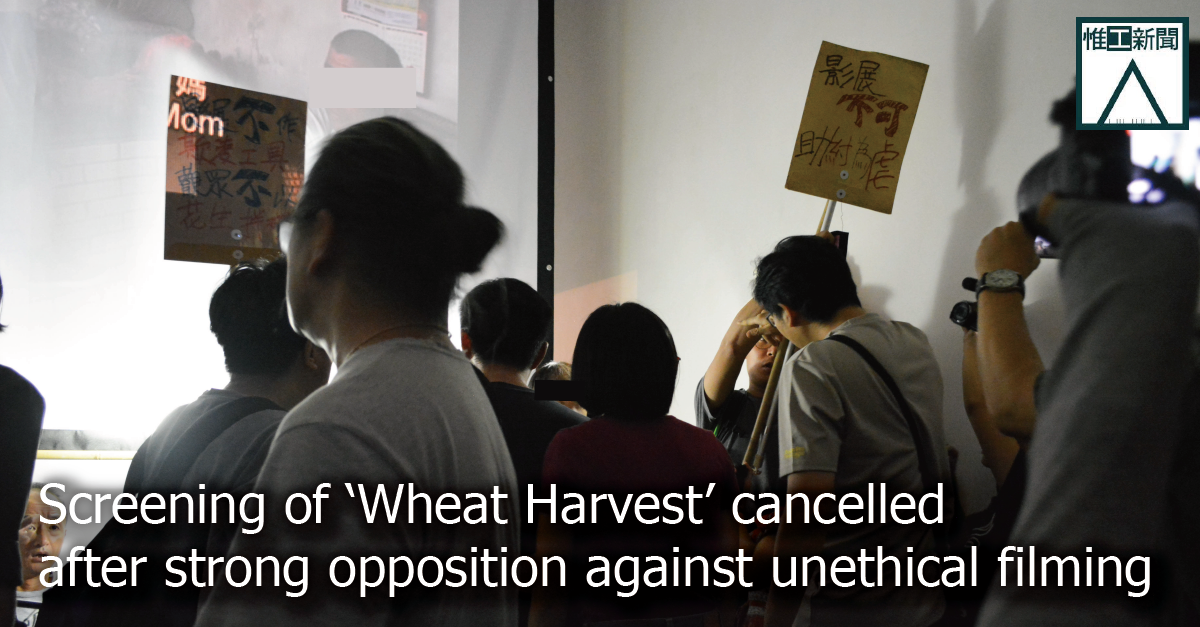 On 21 September, the movie screening of Wheat Harvest, a Chinese documentary about sex workers in China, in Hong Kong faced strong opposition. Wheat Harvest had been criticised for making sex workers information public without their consent. People appear in the film as well as Chinese and Hong Kong organizations had been protesting against the movie screening since 2009.

The screening, scheduled at 19:30 in Green Wave Art, was a part of the Rejection/Determination: Chinese Independent Documentary Film after 1997 film festival. Articles regarding the dispute over the film were found to be sticked on the doors of the venue. According to a group of local activists, they have known about the screening a month ago and had expressed their concerns to the film festival organizer. Before the beginning of the event, the activists distributed a statement of action [1] in the venue and demanded a discussion with the audiences on whether the film would be screened, yet the venue manager insisted the discussion to be held after the screening. Forced attempts to play the movie had been obstructed by the activists who blocked and turned-off the projector, as well as covered the interviewees’ identity using flashlight. Supporters of the screening had argued and attempted to take away the demonstors’ equipments.

Venue managers allowed the discussion to commence with a 3-minute speech limit of each participant. The screening was eventually cancelled after a voting was held at 21:00.

Curator: Wheat Harvest as a significant work should not be banned from screening

Wenhai, curator of the film festival, stressed the significance of Wheat Harvest for uncovering the situation of thousands of sex workers in China. It is also said that an article wrote in 2009 by Lixin Guo [2], associate professor of National Chengchi University in Taiwan, was put on the venue doors to answer the questions from the activists, and they should read it before interrupting the movie screening.

The curator said the obstruction was arbitrary since the protesters had not watched the movie. It is said that such problems like inappropriate shots exist in every documentaries, but such discussions ought to be a technical one instead of a social one.

Protestors: Tong Xu has no right to expose others’ privacy

Protesters from Autonomous 8a, a local grassroot organization replied that it is not necessary to confirm the problem by watching the movie because the director’s way of filming is inappropriate. The protesters do not agree Wenhai labelling them as arbitrary because it is Tong Xu himself who admitted that he decided to make a documentary only after filming, in 2009. People appear in the film did not agree to publicize the footages. The protesters emphasised that they do not think sex work is shameful that shouldn’t be publicized. The key issue is the person being filmed should have the right to decide whether publicizing the film or not. They gave an analogy that even someone who support LGBT community has no right to expose the sexual orientation of any person.

Some audience said that the protesters should not stop the screening even if there is something wrong with the film. Protesters answered that every screening is a recognition Tong Xu’s way of filming, further encouraging other people to follow. Therefore it became necessary to boycott the film until Tong Xu apologize and re-edit the film to protect the identity of the filmed people, as Tong Xu earned recognition and interest from the film without concerning and compensating the sex workers. They further explained that there are a lot of alternatives to learn about the issue of sex work in China and demanded the curator to explain the consideration when choosing to screen Wheat Harvest, a film being criticised for violating documentary ethic, in the film festival.

The venue manager claimed that artists should be autonomous and discussion with the public is not necessary. Therefore in principle he won’t censor the works of artists. Some audience from mainland China agreed to show the film, claiming that they have the freedom to watch it and the value of protesters should not override their freedom. They further explained that many documentaries were prohibited in China and that’s their reason to come to Hong Kong to know about these censored voices.

When discussing about the director’s work, an audience from mainland China agreed that freedom of creativity should not violate the freedom of other people. However she could only hear protesters’ claim but not the victims’ protest. So she wanted to watch the film and judge on her own. She said she believed that everyone would welcome a transparent discussion on the issue, therefore she would like to watch the film in a first place.

Organization: exposing sex workers hurt the community as a whole

Midnight Blue, a mutual support network of sex workers also participated in the protest. The delegate explained that, many local or mainland sex workers may not feel shameful for being a sex worker, but they still afraid their family know about it as it would harm their family members and the community. He seeked the audience’s understanding on the severe consequences of sex workers’ identity being exposed to the public.

Another protester recalled that 9 year ago when the film was put on screen for the first time, a person appeared in the film accused Tong Xu for unconsented filming. For the past 9 years, Tong Xu had no  respond to the argument of sex workers and organizations.

The discussion initiated by the activists was eventually partaken by 15 audiences. The venue manager stopped the discussion in 9pm and forced a vote. 16 people voted for screening while 22 people voted against it. However the protesters did not agree to solve the problem by voting in a first place. They explained that voting simply eliminate the discussion and create fake opposition among audience. They would like to facilitate further discussion on sex work and documentary ethics. They added that if Tong Xu agreed to blur the faces of filmed people and remove their personal information, they would not object screening the film. In response to protesters’ opinion, the venue manager said the version to be shown is the finalized version which did not blur the faces of people. He eventually announced cancel the screening.

A audience who agreed screening criticized protesters for obstructing him from knowing about the issue. Some other audience later change the opinion and object to show the film. One of them was discontented because the curator did not respond to questions and explain the reason of screening. She also regretted that the discussion is more emotional than effectively exchanging views on the role of curator.

Wheat Harvest faced opposition since its first appearance. In March 2009, this film was awarded in Yunnan Multiculture Visual Festival. During the screening, audience discovered that a lot of personal information which may not be proper to be make public  were exposed. After enquiries, Tong Xu admitted that he didn’t get the consent of the filmed people to publicize the footage. He immediately faced protest from various organizations. Later, the film met protest when it was shown in Iberia Center of Contemporary Art in Beijing. In May 2009, the film was shown during the Chinese Documentary Festival in Hong Kong. Several organizations including Action for Reach Out, Midnight Blue and Autonomous 8a openly objected the screening and protest during the screening. The action sparked debate on documentary ethics.

At that time, one of the subjects in the film wrote in the internet, urging not to show the footage publicly. Tong Xu promised never show this film in mainland China. However, he showed this film in the International Conference of Chinese Women and Visual Representation in December 2011. Once again, he faced protest from various organizations.