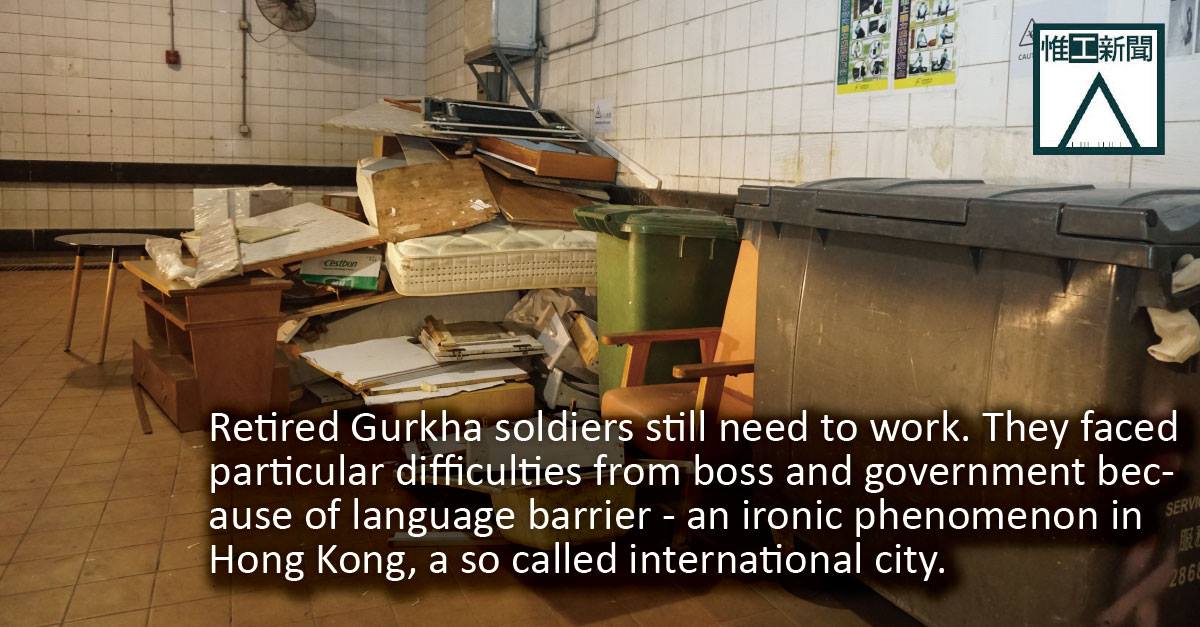 Nowadays there are 400 workers of Nepalese origin working as outsourced cleaning worker for the government (about 3% of the total number of workers). In August and September, the Cleaning Workers Union interviewed 80 Nepalese cleaning workers. It was found that more than half of the interviewed workers have to work another part-time job after everyday’s 8.5-hour work, because of the low income offered by the contractor. As a result, their total daily working hour exceeds 12 hours, with a monthly income of $12,000, which is close to the monthly salary the government pays its directly hired cleaning workers.

We visited several Nepalese cleaning workers in Sai Wan. Most of them got their jobs through friends. They do not have much choice in work because of language barrier. Aa a result, one of them has been working as cleaning worker for 19 years. Some of them worked in restaurants before. They changed the job because of the long working hour in restaurant. However working as a cleaning worker is nothing better. In some occasions, they would be required to dump heavy items including tables and refrigerators. It is common for them to suffer from back pain.

Language barrier also brings other inconvenience to Nepalese workers. The interviewed workers mentioned that they can only communicate with cantonese-speaking workers with gestures, causing a lot of misunderstanding. They imitated the way cantonese-speaking workers scold them - though they do not know what it means, it is easy to know those are swear words. Similarly, it is also difficult for these workers to communicate with government officers when applying for social welfare. In one case, one of the workers applied for transport subsidy. When the government officer called her by phone, they cannot communicate because the worker cannot speak Cantonese or English. Later the worker received a SMS written in English, which she could not read. Her application proceeded only with the aid of Rabina, the staff of the union.

Most of the interviewed workers worked at the same position for more than two years, but they may not receive the benefits corresponding to their year of service. Everytime when they apply for leaves to go to Nepal to celebrate the New Year, they are required by the company to resign. As a result, they will not receive any severence payment when the government does not continue the contract with the outsourcing company.

Some people always relate Nepalese workers as ‘fake refugee’ or foreign workers who ‘steal jobs’ from local workers. It is not the case. These cleaning workers are neither asylum seekers nor imported workers. All the interviewed workers were born in Hong Kong with their family members serving in the Gurkha Brigades before 1997 (please see another article ‘Nepalese Workers in Hong Kong: a story of organizing’ for more details of the history of Nepalese community in Hong Kong https://wknews.org/node/1587).

In the survey conducted by the Cleaning Workers Union, 8 out of 21 interviewed male workers are above age 71. According to Rabina, some of them were former soldiers in the Brigade of Gurkha. After retiring from the army, they still have to work to earn a living. It shows that the problem of retirement in Hong Kong affect all the elderly regardless of race.

Considering the low salary of outsourced cleaning workers, the Cleaning Workers Union is advocating the government to use ‘living wage’ as the method to calculate the salary of workers in the outsourcing guideline. Also, the Union suggests that the government and contractors should provide contracts and regulations in the languages of ethics minorities for workers.