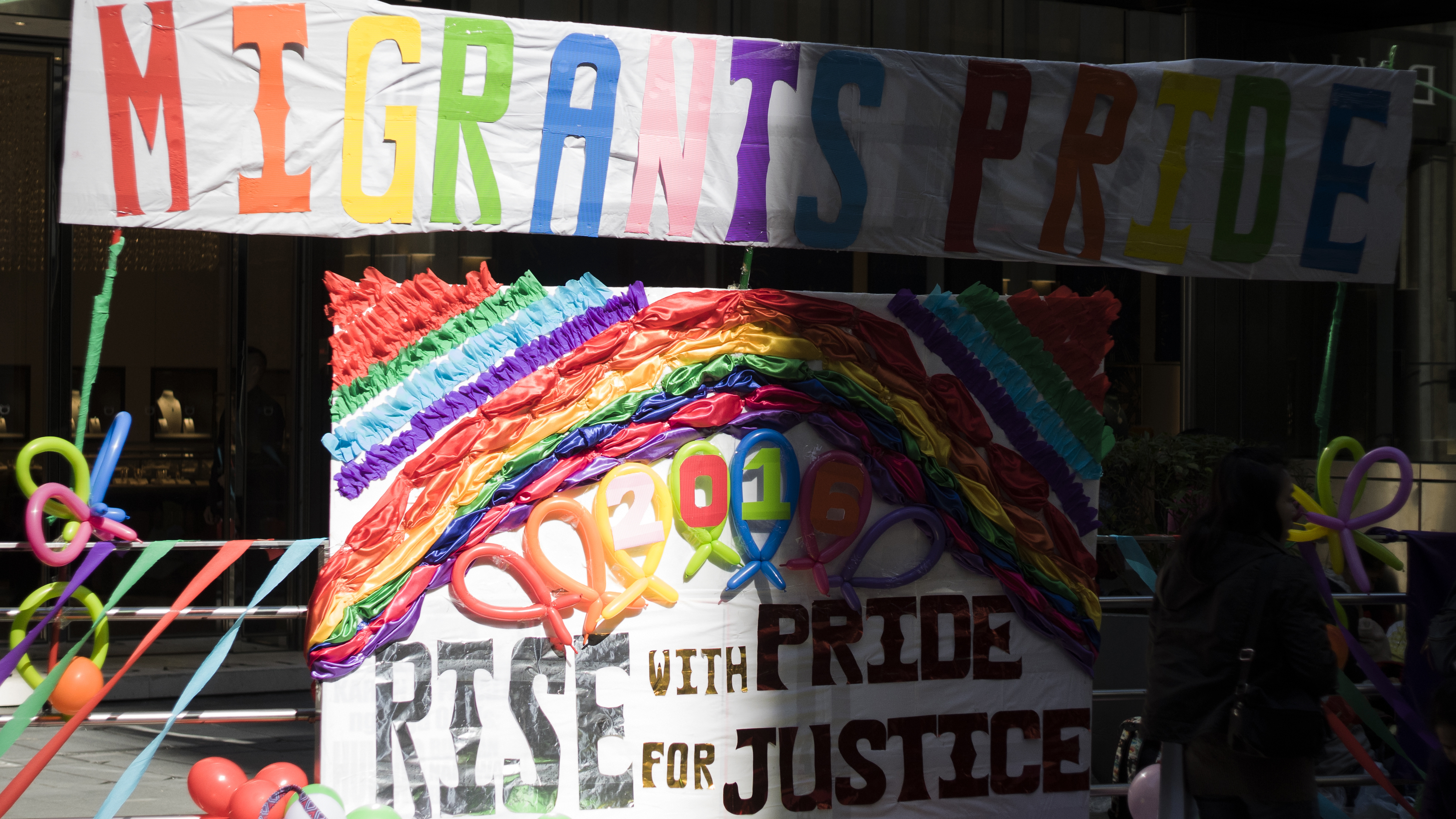 Participants gathered at Chater Road, Central while migrant workers delivered speeches and performed “One Billion Rising”, a dance to end sexual violence against women. "The LGBT are not just those in the city and the academe who are capable of understanding theory.They are in the farmlands with landless farmers, in factories with abused workers who don’t earn enough, in schools with students who cannot study, and parents without job security."said Shiela, spokesperson of Gabriela HK. "Though an Anti-Discrimination bill was first introduced to Congress twelve years, the Philippines does not have Anti-Discrimination legislation......This highlighted how the LGBT fight for equal rights and against discrimination is part of the overall struggle for socio-economic and political changes." 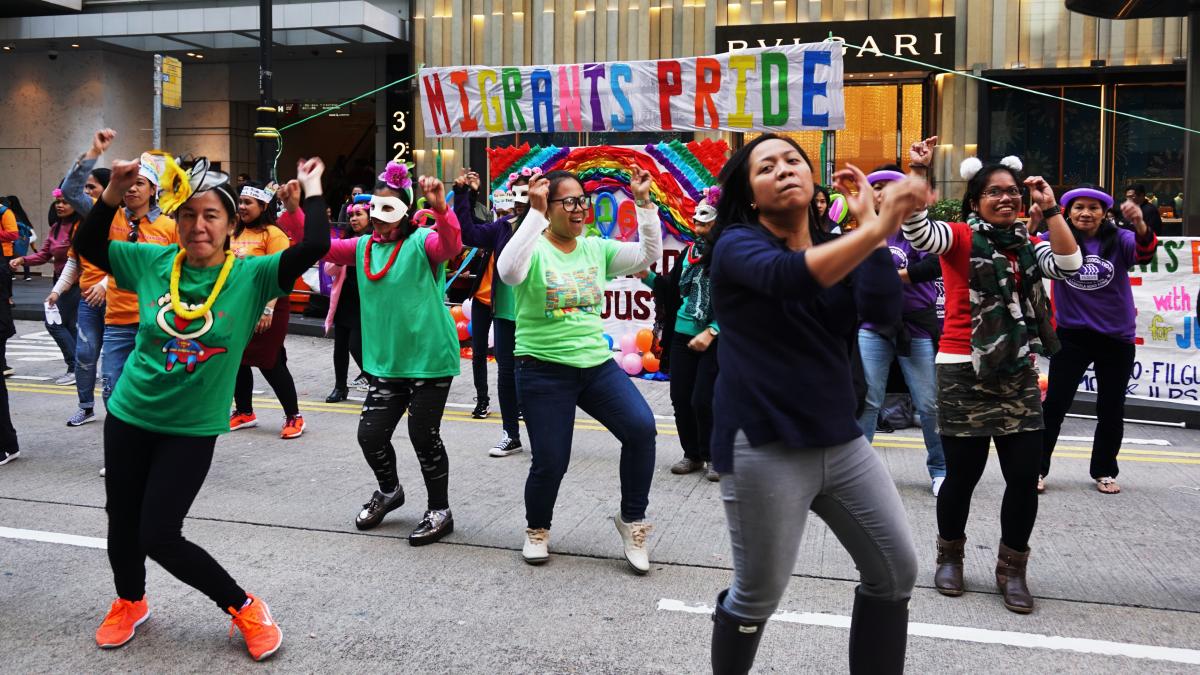 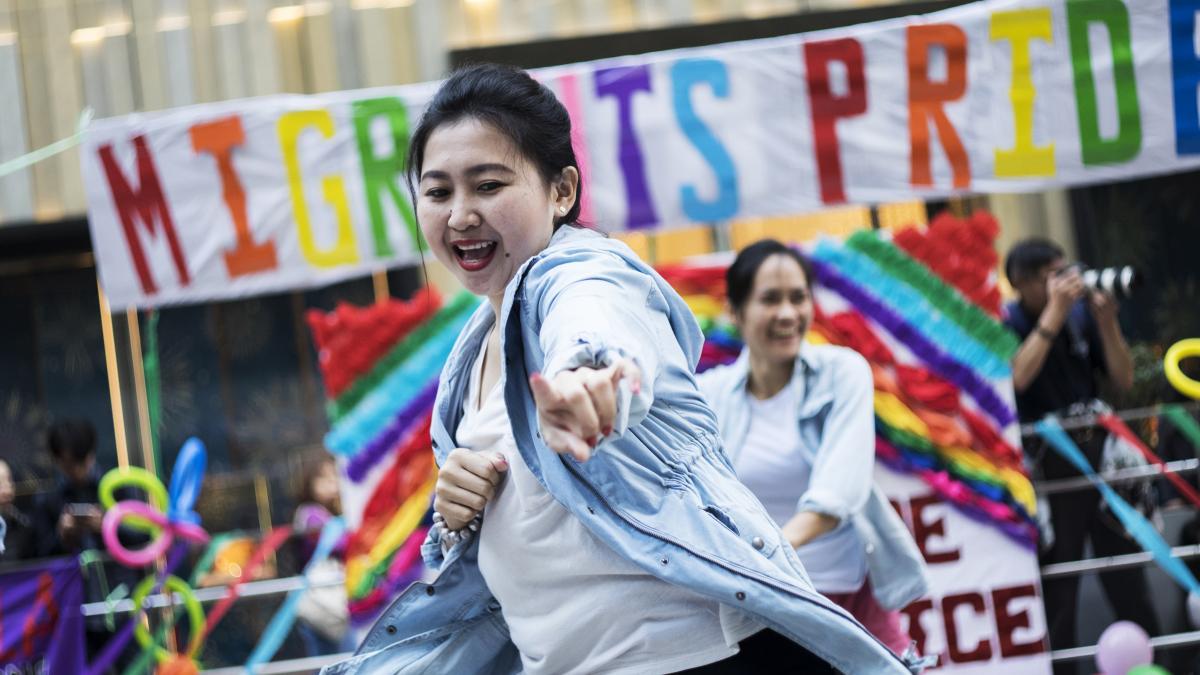 More local took part in the pride parade than last year. Local grassroots organisation rehearsed singing and dancing performance devotedly. “Like a Rock”, was the name of the performed song, according to the spokesperson, it implied that solidarity of workers from various countries and races, could fight against the violence of globalized economy. The song was rearranged by Noise box from the well-known Korean social activist’s anthem “바위처럼”, one of the hit shared by notable participants from anti-WTO protest in 2005. 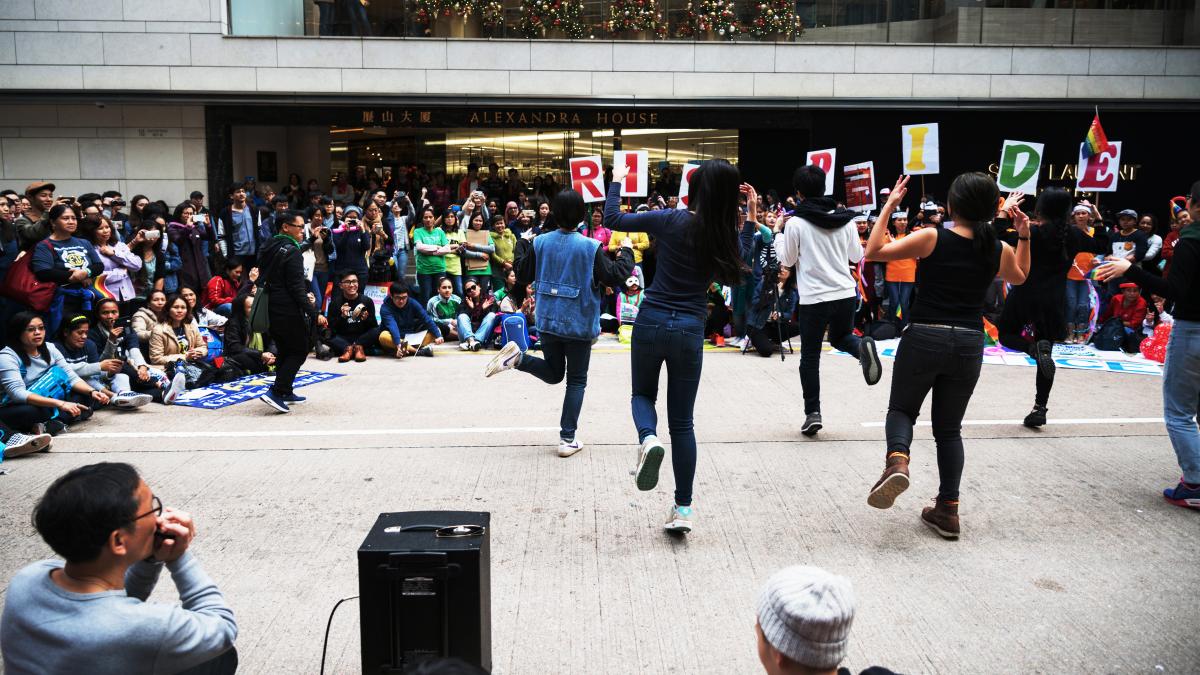 “I would like to thank the migrant workers by performing.” A local participant - Wai the casual worker said. “I am a homosexual. I learnt to be proud of both sexual and worker identity from the migrant workers. The local LGBT group should learn from them too. There are ways to fight for workers’ rights and against exploitation of homophobia.” He pointed out that workers and the ordinaries were pretty and should be proud of. He wore earrings made of copper wire and plastic beads confidently to exhibit the essence of queer. 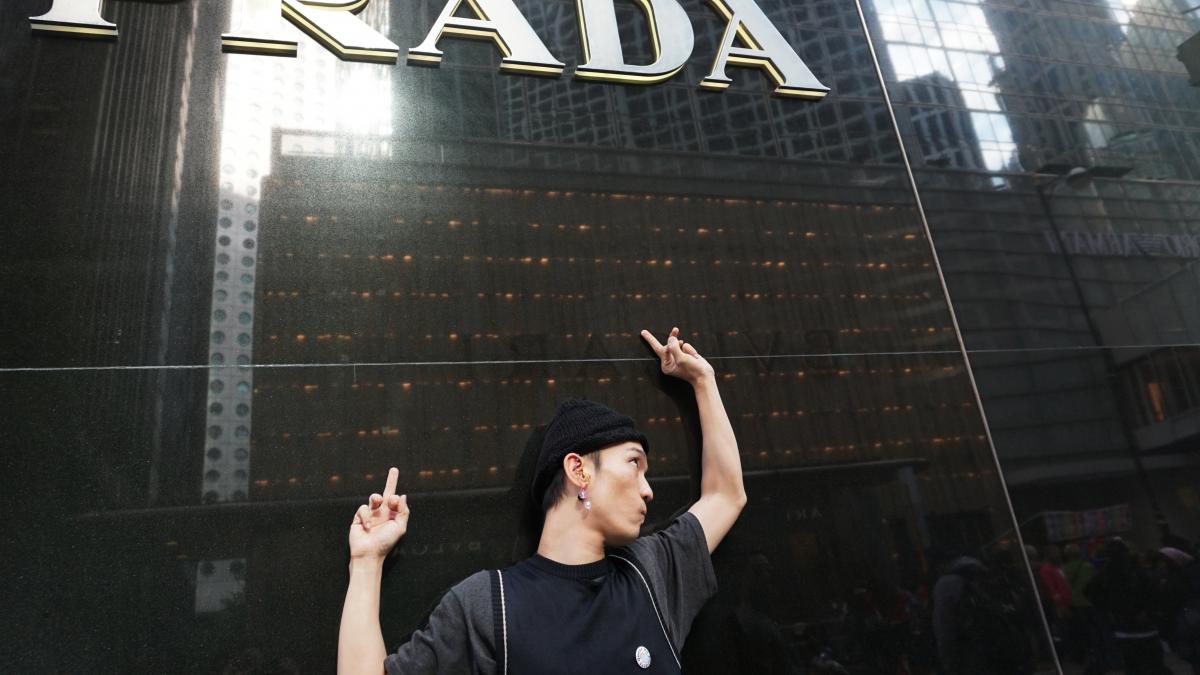 Wo, another participant of the parade, a migrant from mainland China that made ends meet in the city, said he once had a bisexual partner that envisioned him. He joined the parade to show his support  for fellow queer migrant workers.

Activists encouraged the crowd in local pride parade that took place the day before to join the migrant pride parade. They indicated that homosexuals were from various cultural identities, social classes and races, these social inequalities made some of them yet to come out. Migrant domestic workers, who have their only day off on Sunday, were excluded from local pride parade, which was held on Saturday. Migrant workers spent their youth in this city, Hong Kong LGBT society should never abandon them. 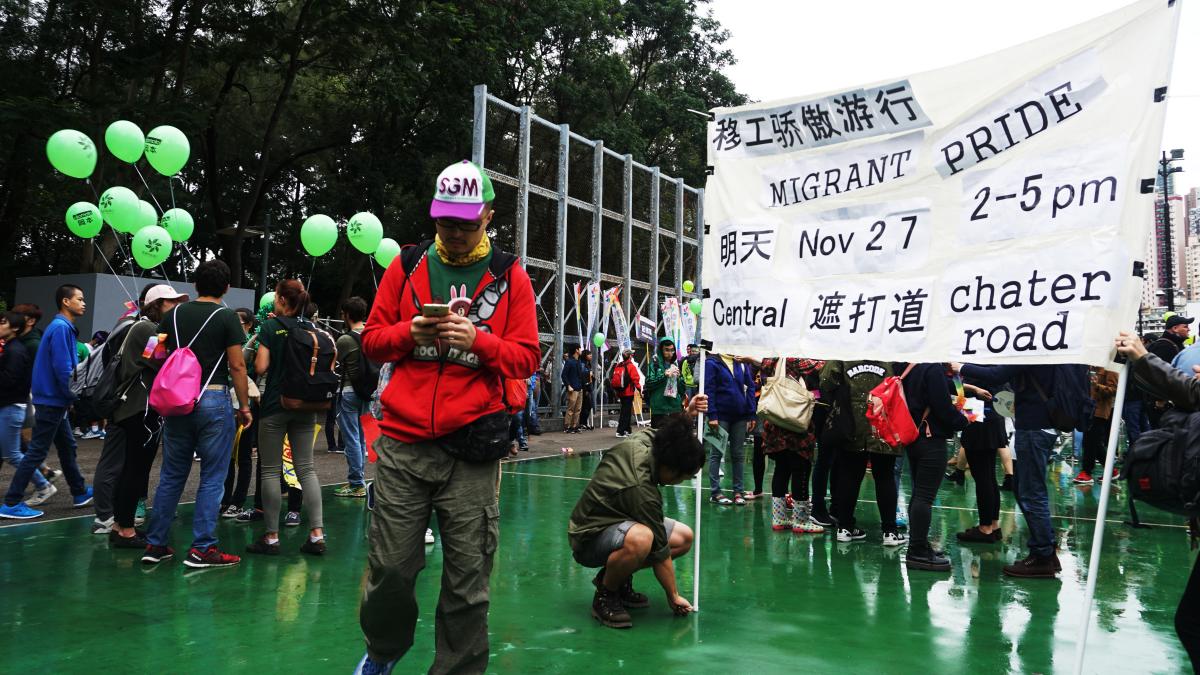 Migrant workers invited participants of different races to join their activities. They threw and catch a ball with colourful strings, eventually the strings linked the crowd together, a vibrant web was built between circle of people. 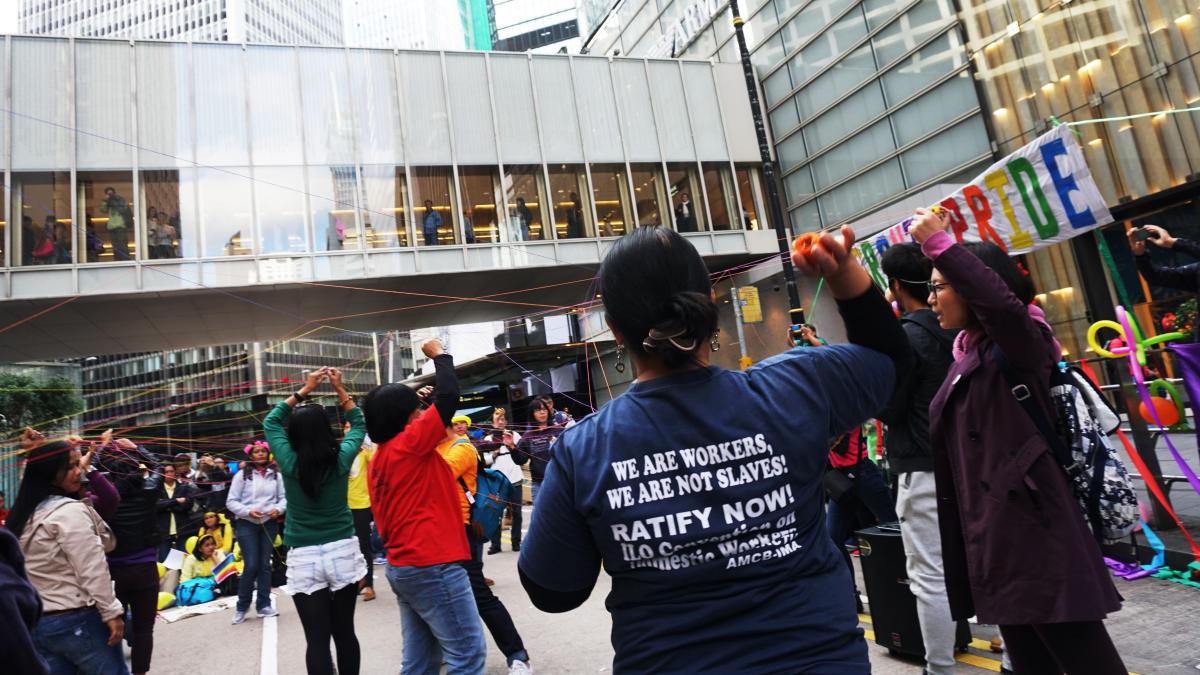 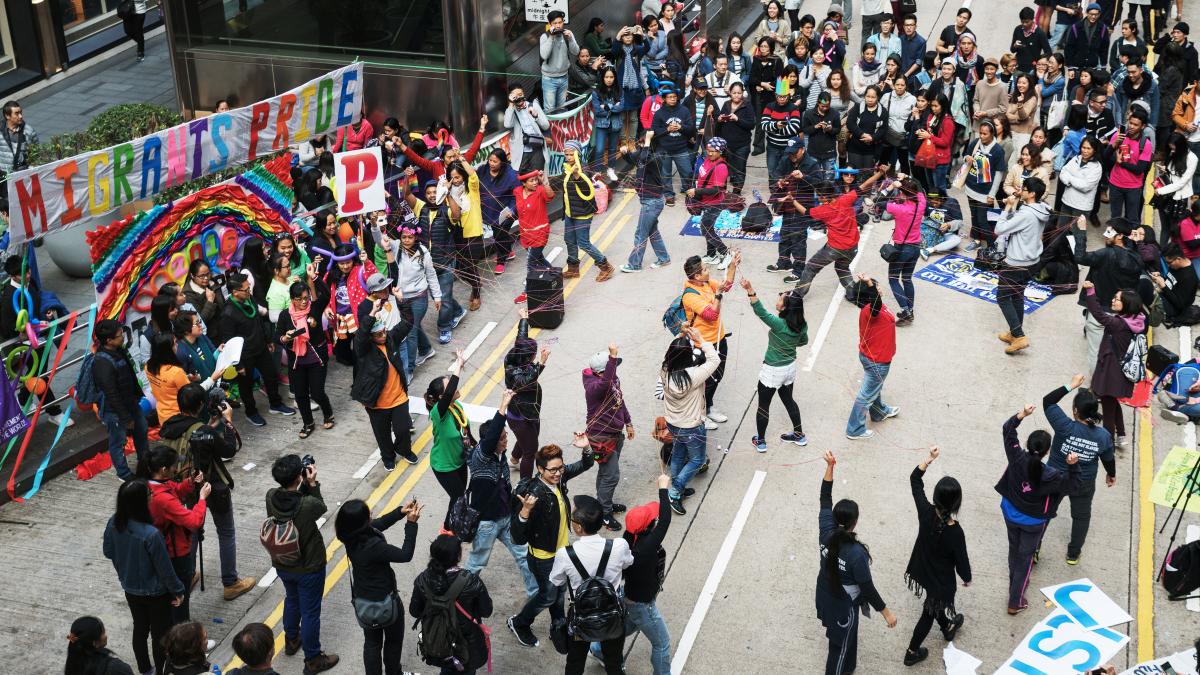 DIY banners of the participants, showing their appeal and support. 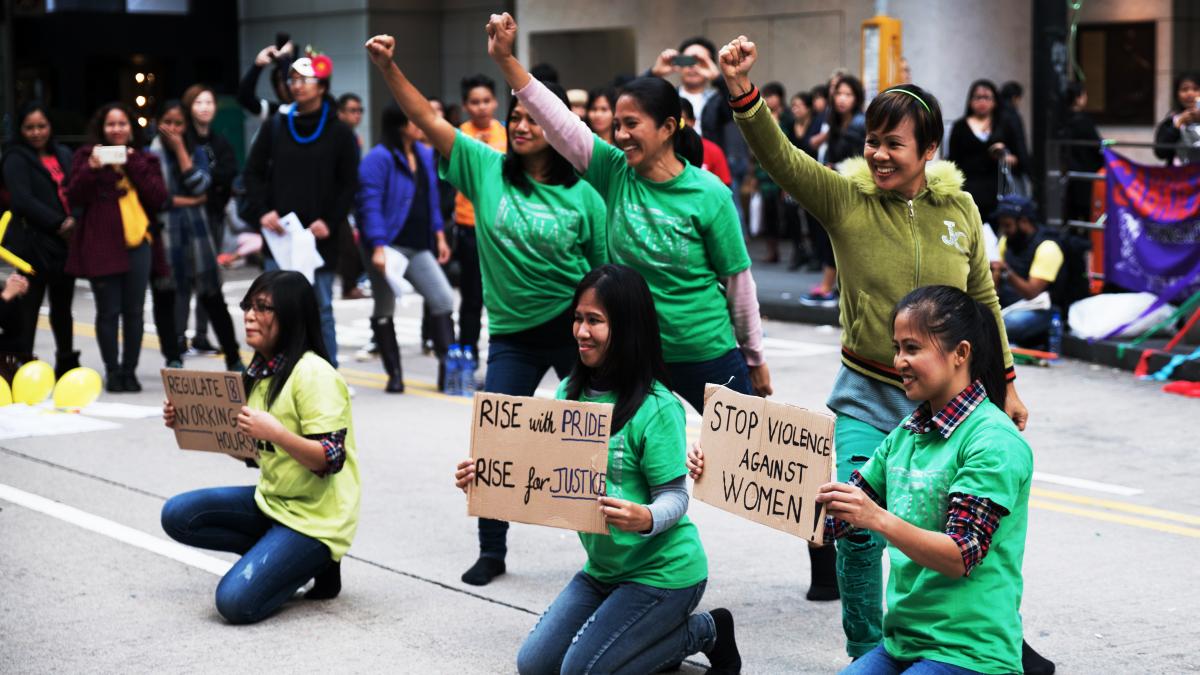 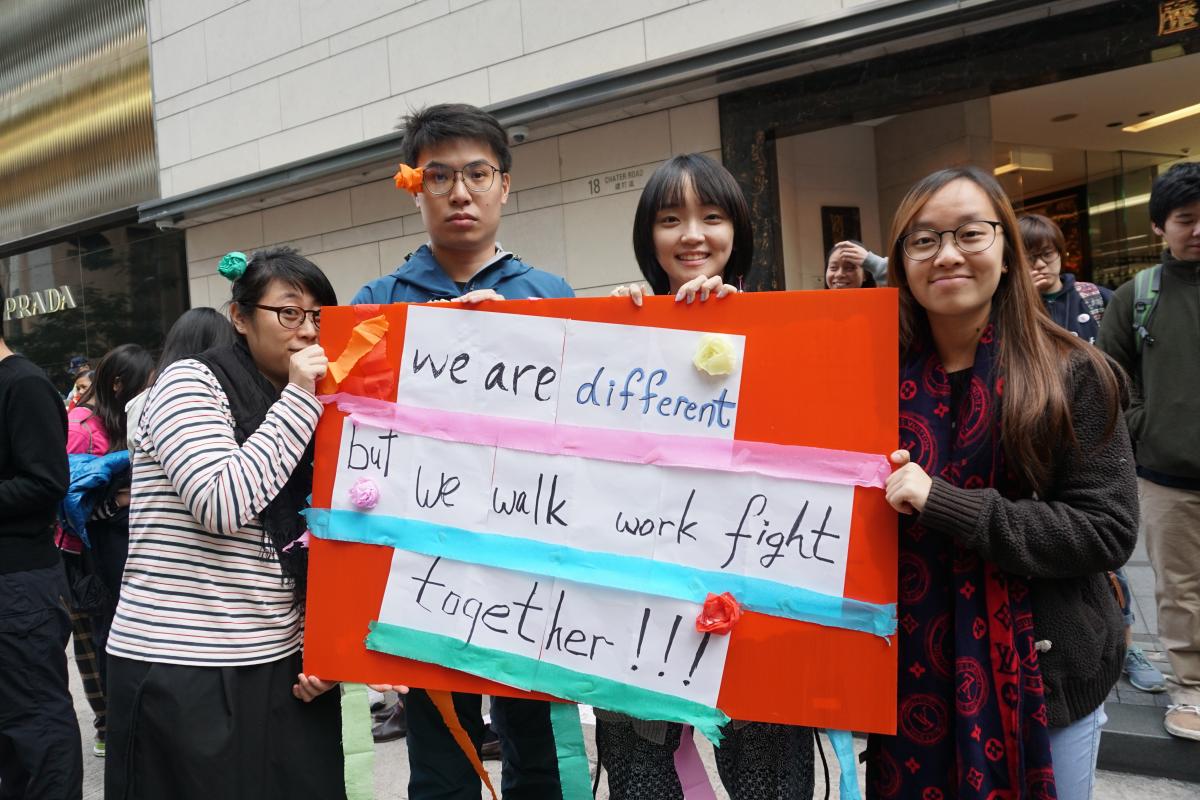 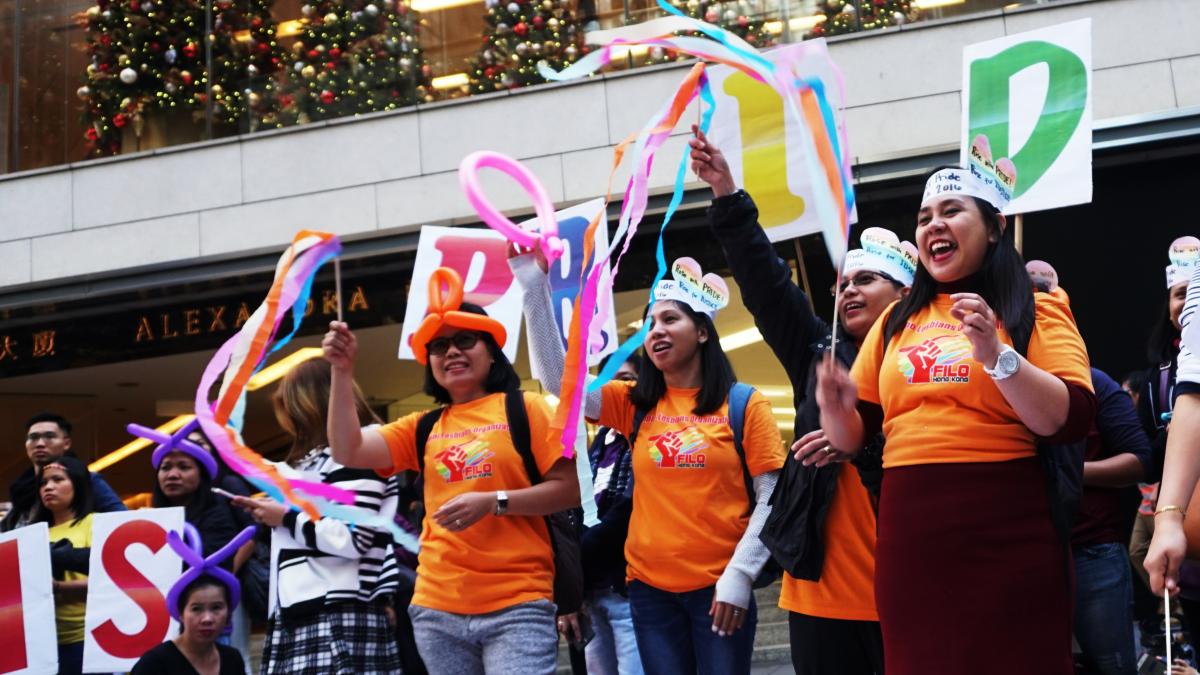 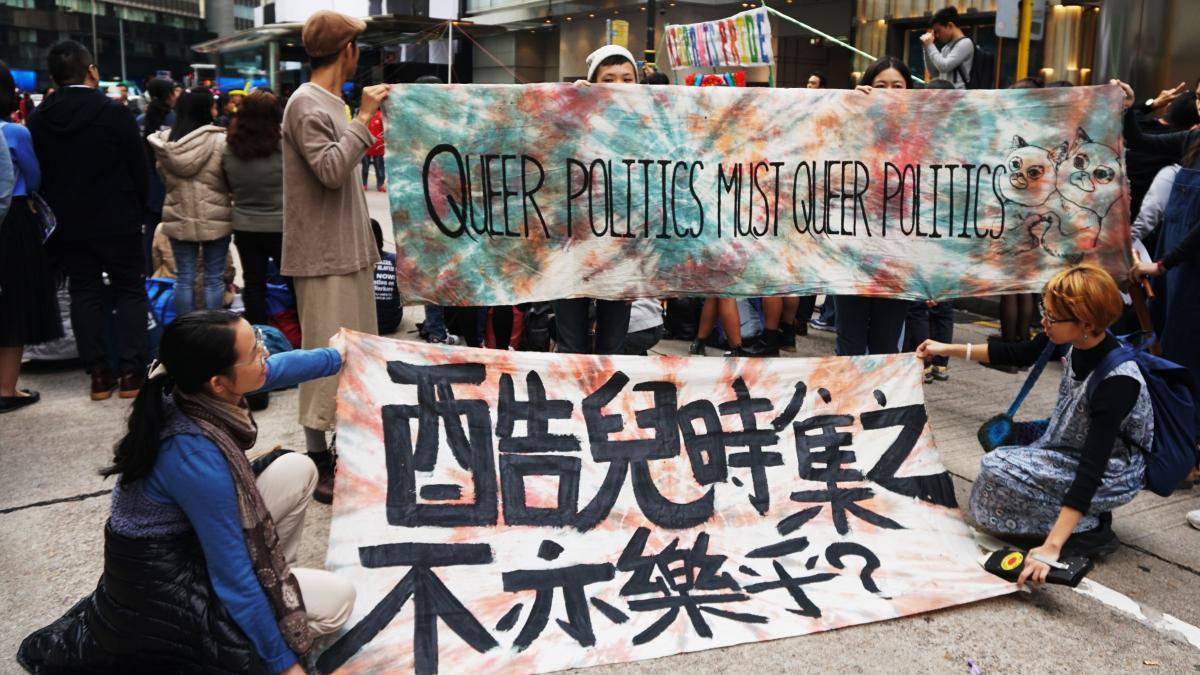 The crowd started the parade at 4pm and made their way down HSBC building, Chater Road subway and Hong Kong city hall, where migrant workers usually gathered. Participants were chanting “hey hey ho ho, homophobia got to go”, “we are queer, we are here and we'd like to say hello” along the way. 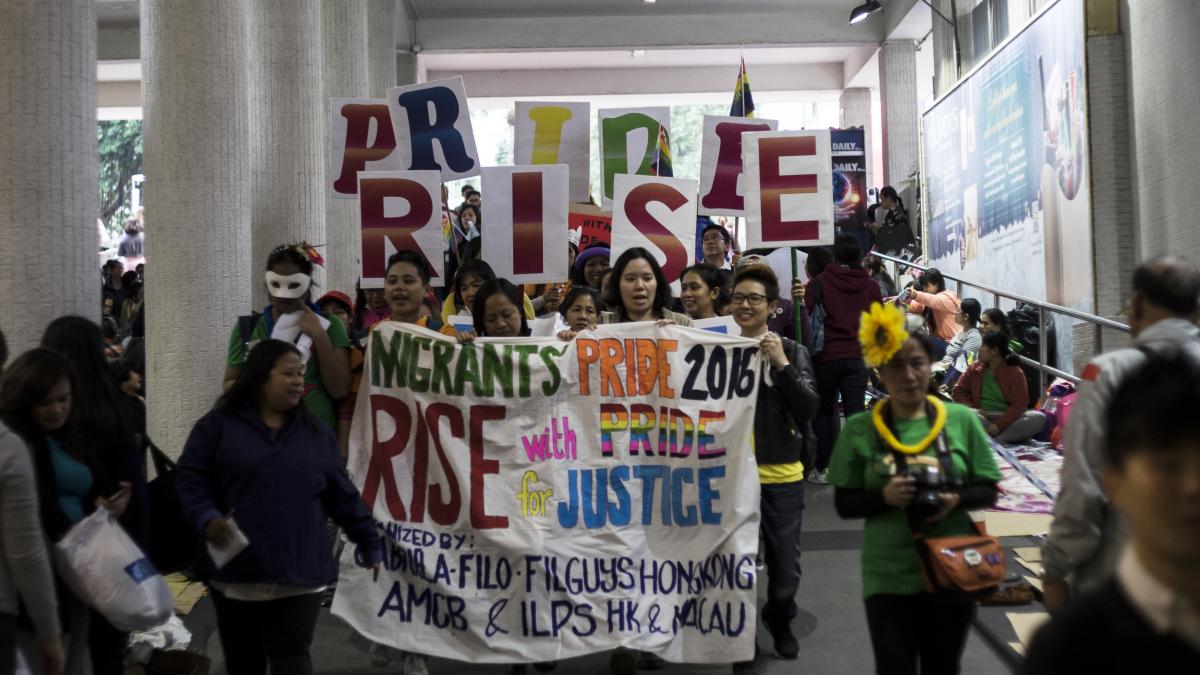 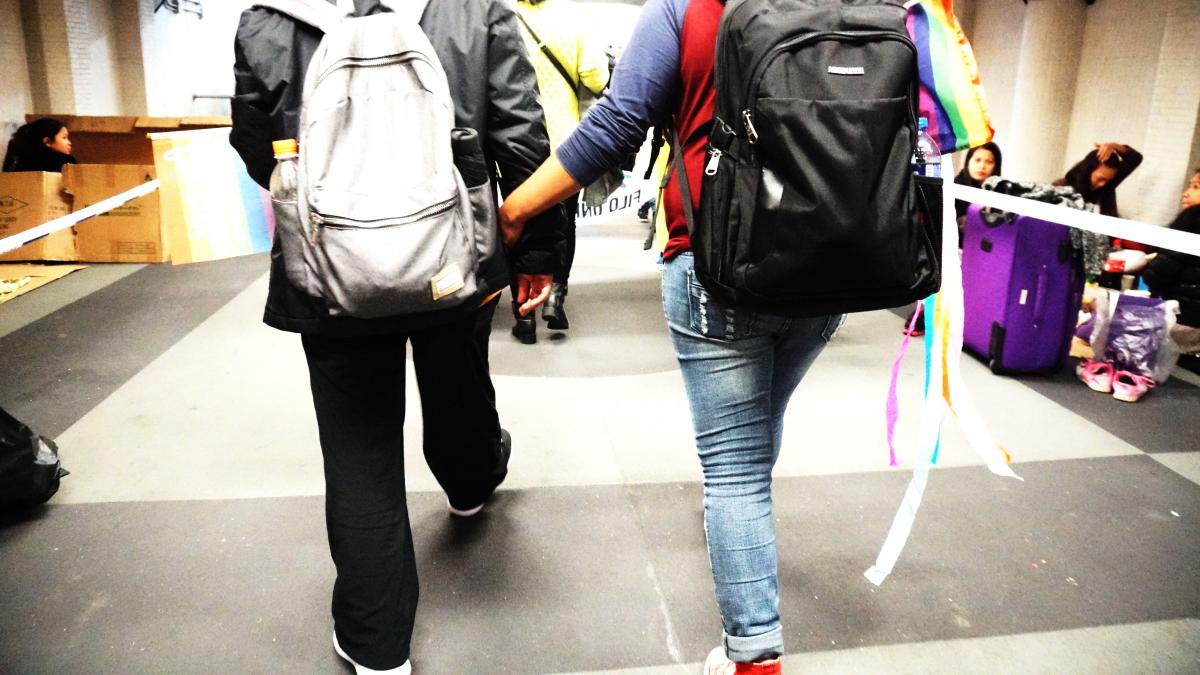 Apart from queer migrant workers, a miscellaneous collection of organisation, such as interest groups and unions threw themselves into the parade as well. 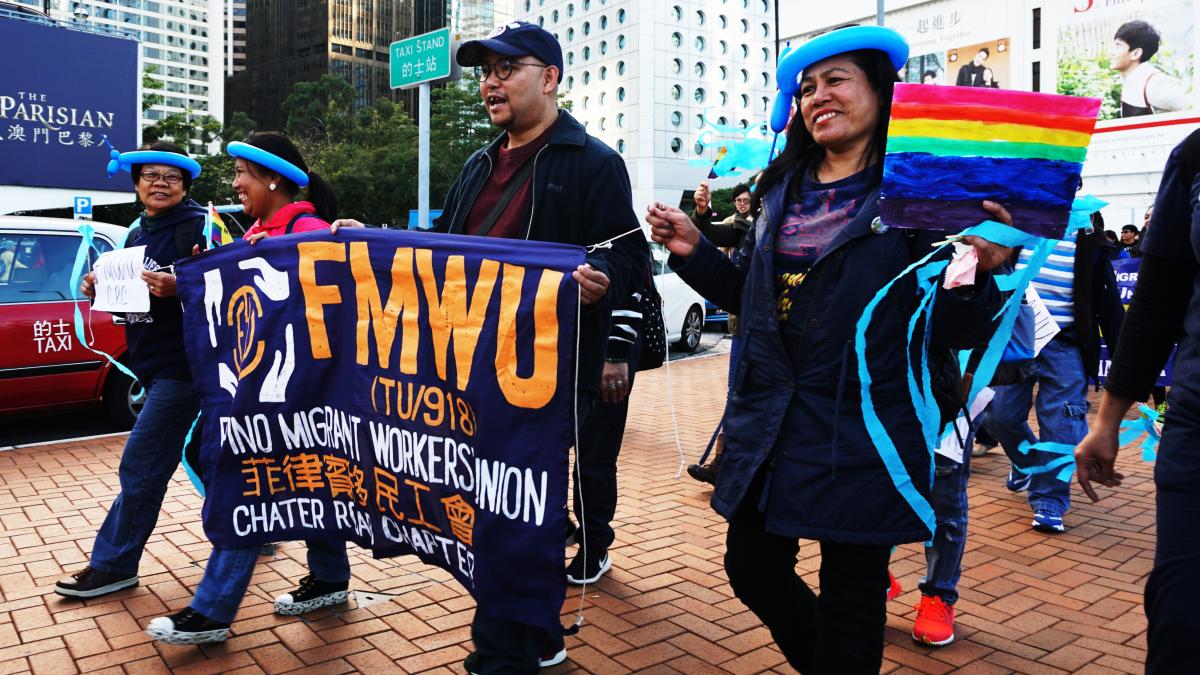 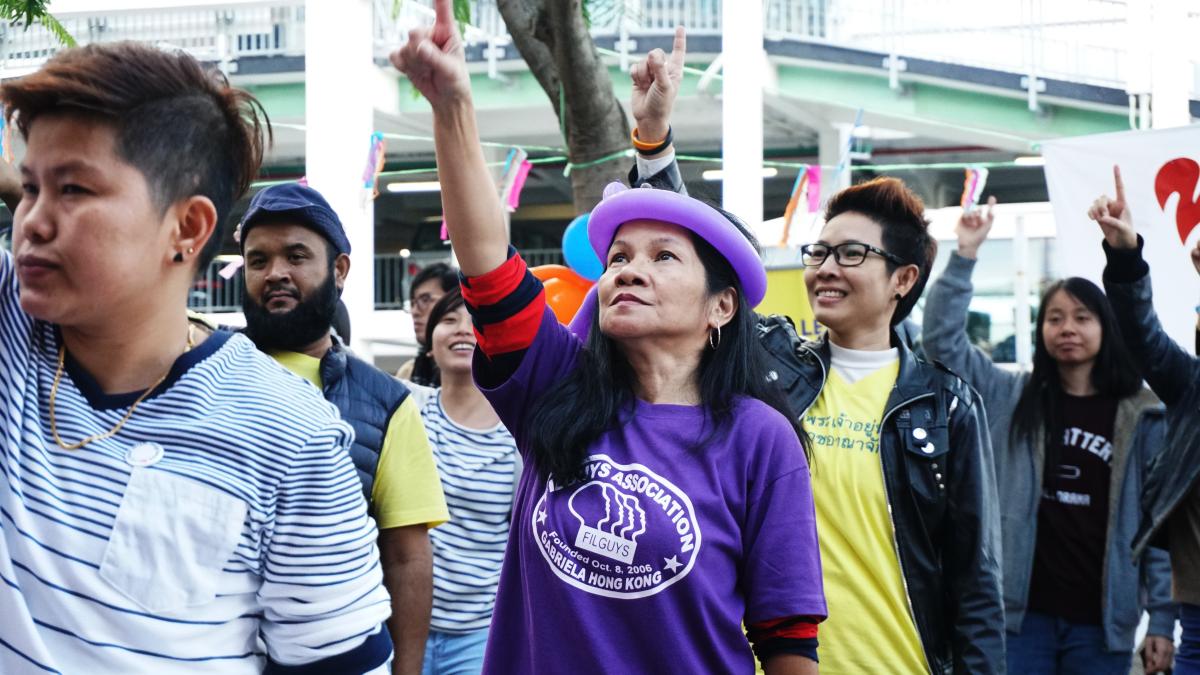 Participants were sitting on the ground, enjoying snacks and music after the parade. 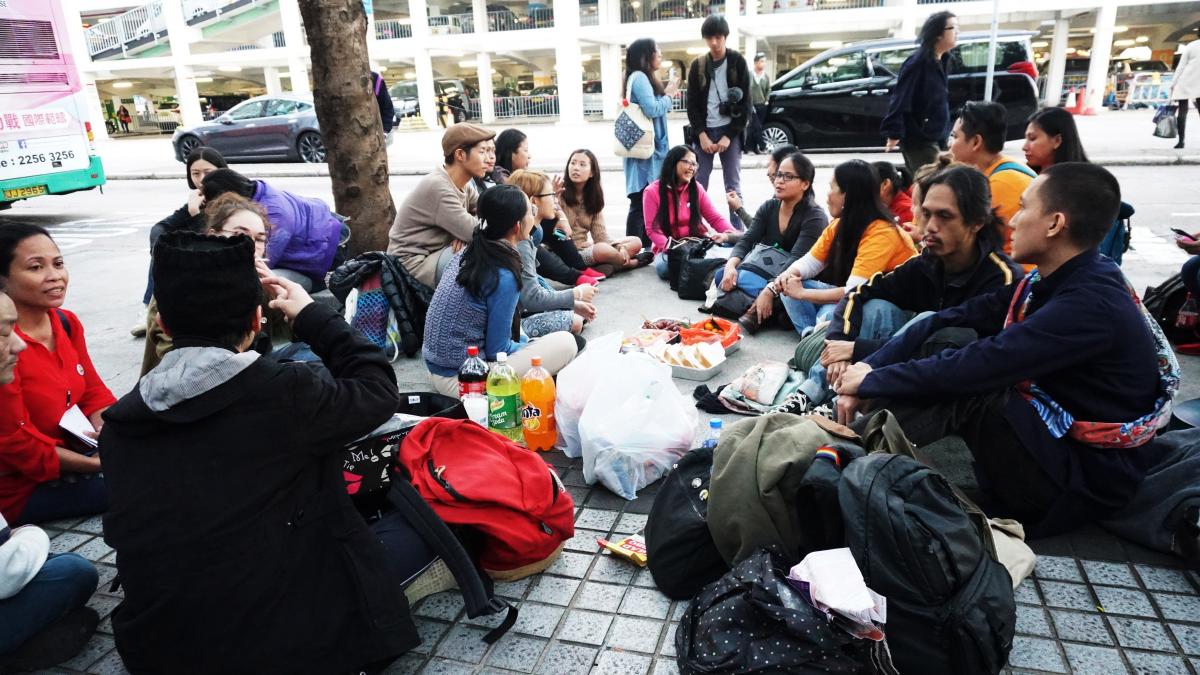 HSBC Community Festival was held at the same time as the migrant pride march. More than half of the Chater Road was occupied by the bank’s event, thus the territory of migrant workers was further limited. Space - is always a problem working class has to deal with in Hong Kong. 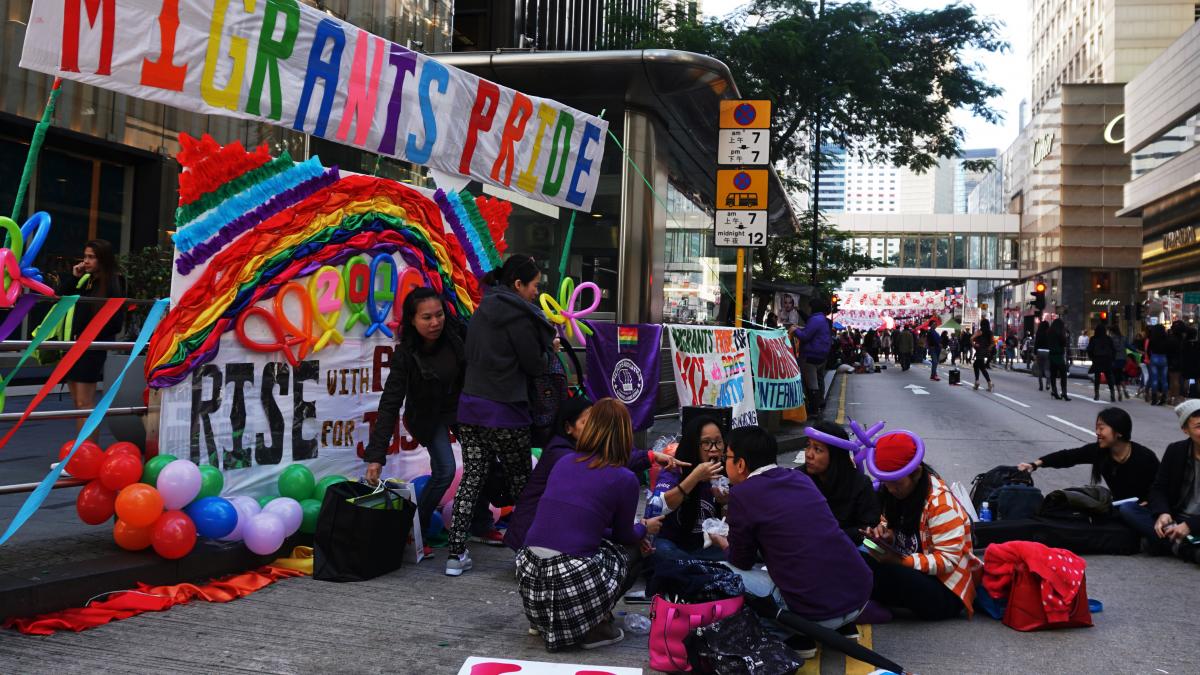 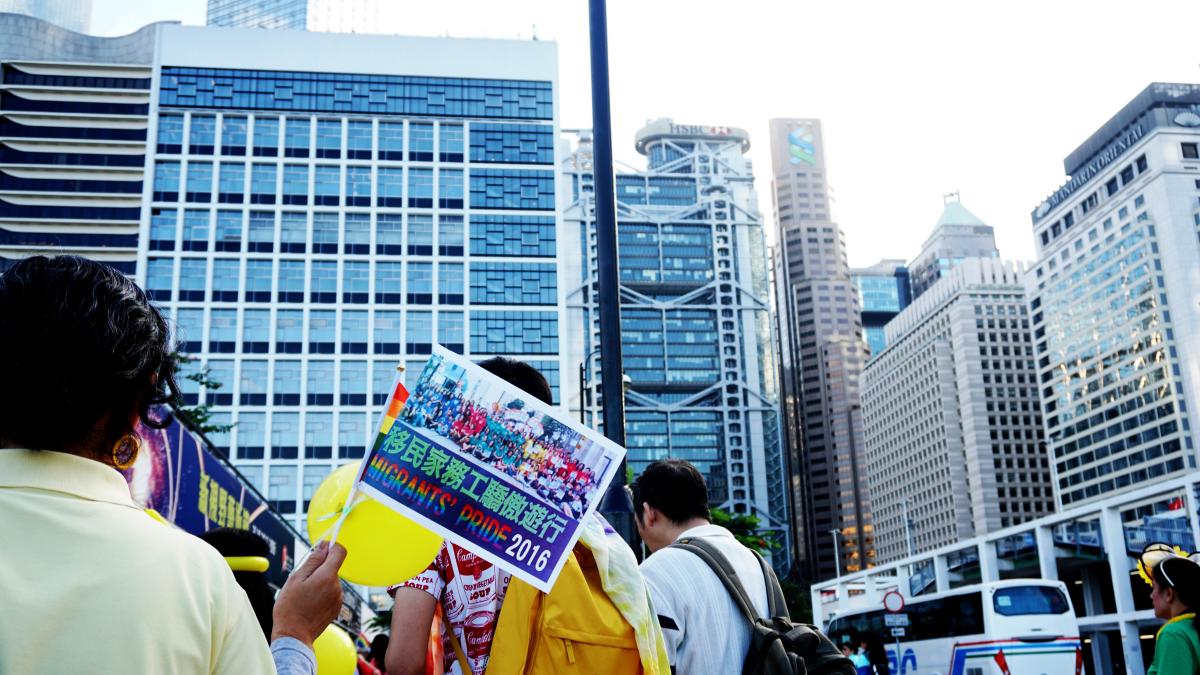 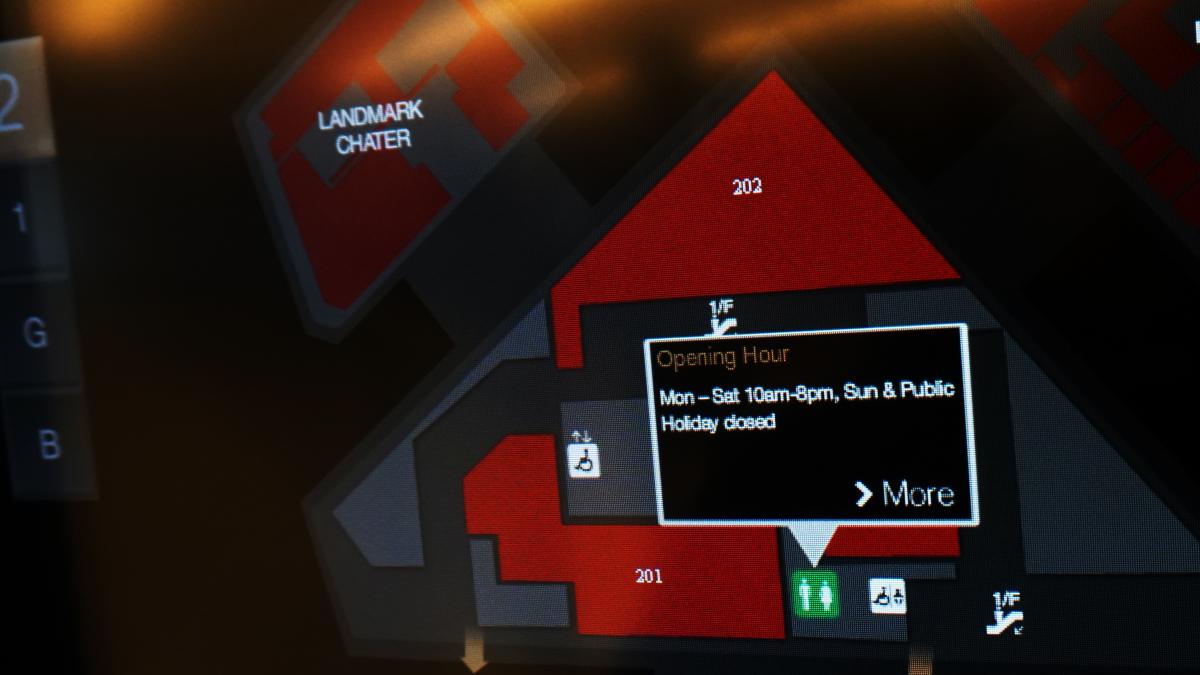