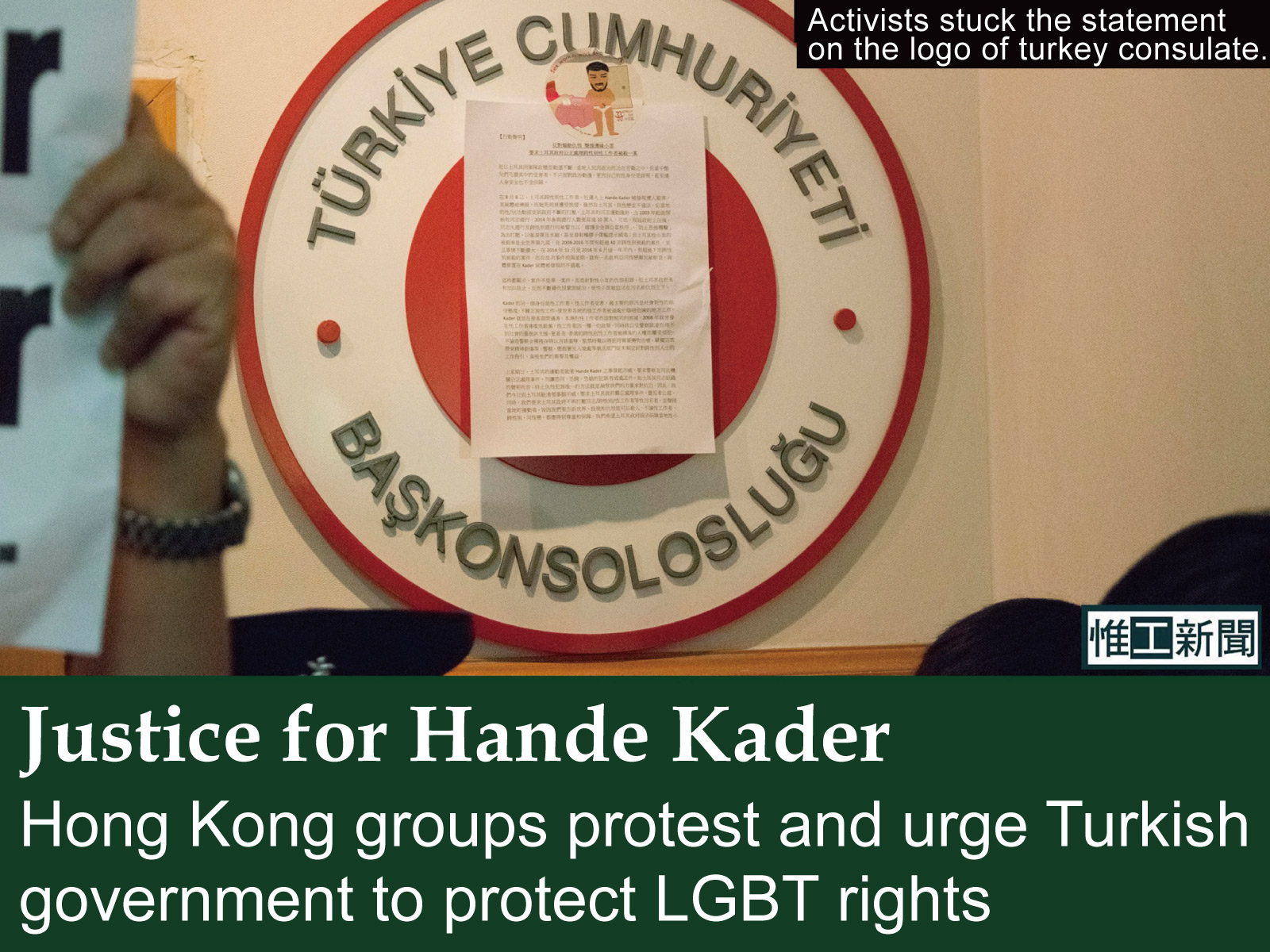 On 23 August (Tue), various Hong Kong groups launched an action in solidarity with the LGBT community in Turkey. They protested in the Turkish Consulate General, calling for justice for Hande Kader, a recently murdered transgender sex worker. Activists clashed with the police and sent the statement to the office, where the officials refused to receive the statement.

The spokesperson criticized the Turkish government for suppressing sexual minorities in the country. Besides cracking LGBT activities with brute force, the government does not take any actions against the hate crimes targeting sexual minorities. In the past 8 years, 40 transgender people were murdered. Groups also added that Hande Kader was murdered during providing sex service, showing sex workers are stigmatized such that they are vulnerable to the attack of customers and police. Similarly, the law enforcing departments in Hong Kong has no regulations on dealing with transgender people. As a result, the transgender people in custody are suffering from serious violation of human rights.

Hande Kader, a transgender sex worker and activist was found raped and burnt on 8 August. Two weeks before, a Syrian refugee homosexual was beheaded at the same area. Homosexuality is legal in Turkey. The LGBT movement is also active. Turkey has annual Pride Parade since 2003, the number of participants reached a peak of 100,000 in 2014. However the current government keeps suppressing LGBT movement, using the excuses of 'maintaining social order' or even 'counter terrorism'. The police force even used tear gas, water cannon and rubber bullet to attack rally of LGBT movement.

On the other hand, Turkey has the 9th highest rate of transgender murder in the world. 40 transgender people are killed since 2008. Groups believe that the murder of Hande Kader is just one of the hate crimes against sexual minorities, which the Turkish government never tries to avoid.

Hande Kader was an activist, also a sex worker. She was suspected to be murdered during providing sex services. Midnight Blue (午夜藍), a Hong Kong group organizing male and transgender sex workers, which participated in the solidarity action expressed that Hong Kong sex workers are facing similar threats. The regulation of 'one sex worker per flat' pushes sex workers to face the violence of customers alone, instead of being able to support each other.

Midnight Blue has been handling 45 cases of arrested transgender people since 2013. In these cases, transgender people are always forced to take off all the clothes, being searched by police officers not according to their gender identities. They are also frequently humiliated by officers. If they are found guilty in court, they will be treated as mentally disordered people and sented to Siu Lam Psychiatric Centre. During their incarceration, their needs are always ignored and they can hardly find the hormones they need. Some of them also have their long hair being cut.

Midnight Blue also handled cases of transgender people being held by the Immigration Department. The Deparment held them in solidary confinement, claiming to 'protect' them. However the cells were cramp and bright, making the people suffer even more. The representative of Midnight Blue stated that it is not fair for transgender people to be punished by solidary confinement because of their gender identity.

Sexual refugee has no where to go?

Autonomous 8a, another group joining the action related the suppression of sexual minorities to the global exploitation of grassroot people. They stated that the murder of Syrian homosexual refugee clearly shows the necessity of other countries to help, especially when the sexual minorities are under death threat in their home countries. Unfortunately Hong Kong and other places with better situations do not welcome refugee, not caring how dangerous for them not to leave. Therefore the groups have to launch the solidarity action to express the care and support to the LGBT community in Turkey.

related news
“We are Queer, We are Fabulous” The First Migrant Pride Parade in Hong Kong